Harris, winner of the reverse-grid Race 2 on Sunday morning, took his second victory of the weekend, while a final-corner pass gave Woods the round honours.

EFS 4x4 Racing’s Harris made short work of his competition, despite starting sixth as a result of retiring from Race 1 with mechanical problems.

His early progress was stymied by a Safety Car period caused by a first corner crash for Tom Alexander’s Holden.

When racing started, Harris moved from fifth to third on lap five, then into second on lap six before passing Elliot Barbour at Turn 2 on lap seven of the nine. 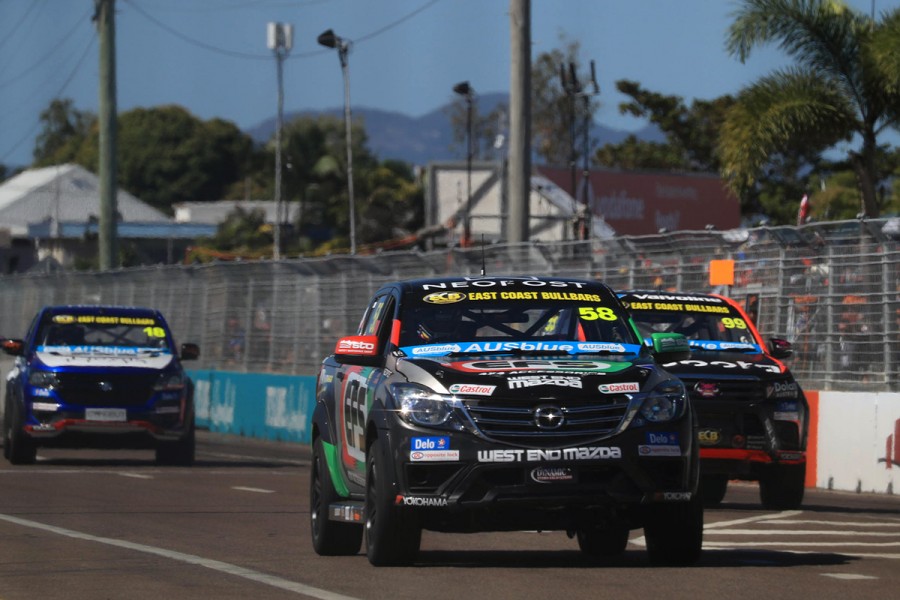 “Once again, our speed was really good – once I had clear track, I was able to pull away," Harris said.

“Race 1 could have been very costly, so to come second for the round and only lose a couple of points to Craig in the championship was a good recovery."

Woods started second and moved past polesitter Craig Dontas off the line, before loosing places to Harris and Barbour later in the race.

Barbour and Woods battled back-and-forth for second and third, with the latter sneaking past at the final turn on the last lap to take the round win by two points.

“I’m in disbelief about winning the round, quite shocked to be honest. I don’t know quite how we managed it," said Woods.

“After qualifying ninth yesterday, we didn’t think we had a chance but we improved the car out of sight, and made the decision to stay out of trouble in the races.

“In the last race, we drove as hard as we could and made the most of other drivers’ mistakes.

“We know we don’t have the fastest car but we’ve been consistent, and it’s working for us so far.”

Barbour had to settle for fourth in Toby Price’s regular factory-backed Mitsubishi Triton.

His team-mate Dontas had been in the box seat to win the round but fell to seventh in the second half of the race, and wound up third for the weekend.

"We blew another turbo hose on the outlap, and just didn’t have the pace to fight with the front guys," added Dontas.

"It was a very frustrating race because we knew we only had to finish in the top four to seal the round win.

"It’s nice to be on the podium after all our dramas in the first two rounds, but also disappointing to let a round win slip away.”

Aaron Cameron, who did not finish Race 2 on Sunday morning, bounced back with a fourth-place finish, having started last.

Ben Walsh and Tomas Gasperak filled the next two places, ahead of the ailing Dontas and Matthew MacKelden, who lost time early.

Alexander was the race’s only retirement, his SP Tools Colorado crashing heavily into the outside wall at Turn 1 on lap one after a tangle in the pack.

“It was just a really unfortunate incident,” Alexander said.

“I made a good start and had a run on Ben and I thought I was clear but got tagged in the left-rear – the first hit unsettled the car and the second one sent me into the wall.

“I haven’t seen the replay yet so I’m not going to blame anyone.

“I’m OK but the car has a fair bit of damage, so we’ll need to work hard to fix it for the next round at QR in a couple of weeks. It’s a big hit for our championship as well.”

Christopher Formosa missed the final race, after crashing his Ford Ranger in Race 2 earlier on Sunday.

Round 4 will be held at the Coates Hire Ipswich SuperSprint on July 20-22.