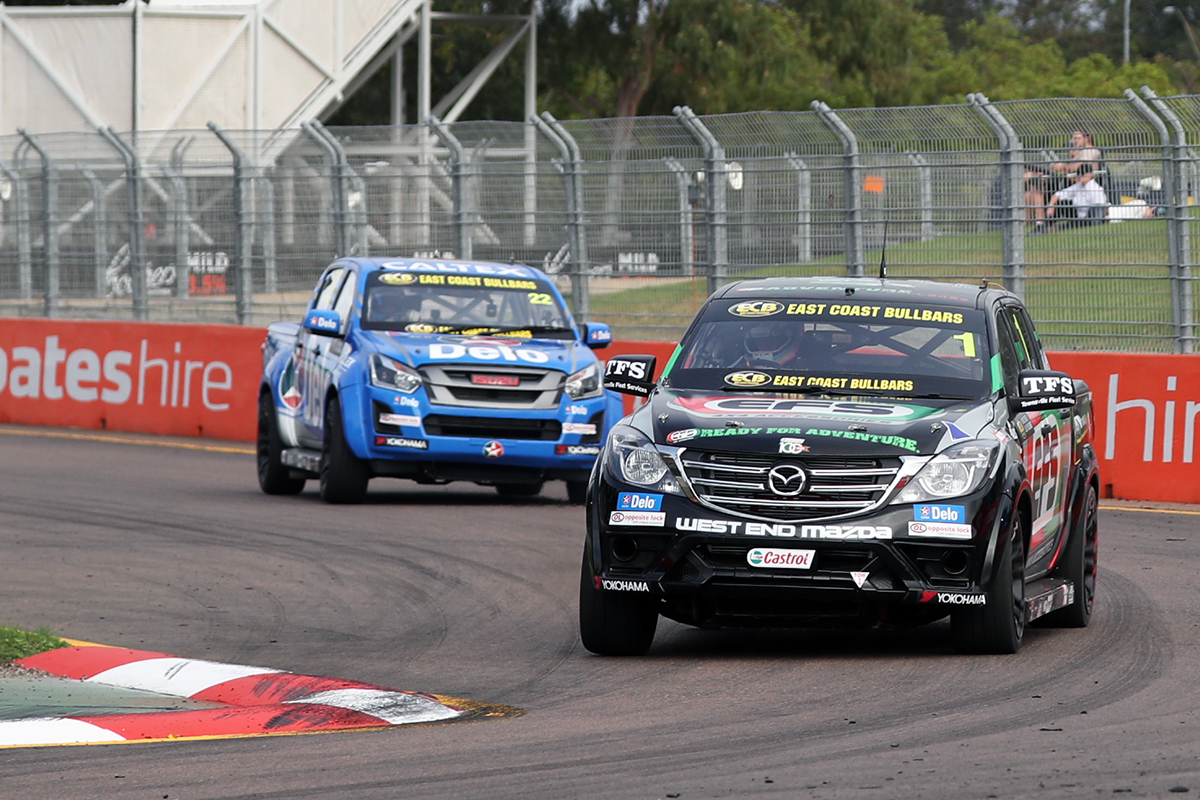 Defending champion Harris started sixth, one place behind Alexander with a reversed-grid from the Race 1 results and went on to take the chequered flag.

He took the lead at Turn 3 on the second lap, slotting past Toyota driver Ben Walsh for the lead and ultimately finishing just 0.5348 seconds clear of Alexander.

The Caltex Isuzu of Alexander was Harris' closest competitor, but couldn't find a way past the EFS 4x4 Mazda, despite a late charge.

With the win, Harris closes the championship gap to 64 points behind series leader Alexander, with one race left for the fourth round.

From the rolling start, Walsh led the opening lap in the Fat Freddy's Toyota Hilux, getting by front-row starters Christopher Formosa and Craig Thompson, as well as Craig Woods.

Walsh controlled proceedings from Turn 3, until he was passed by Harris at the same turn the following lap, with Alexander following suit shortly after.

Once Harris made his move, he controlled the field from there, with Alexander a close second, but not able to find a way past.

"I made a good start, but there was no room for me at Turn 1 and I had to brake, which cost me a few places on the first lap," Alexander explained.

"I had a good battle with Ben Walsh and it took me a few laps to clear him, but after that the Ute was fast, and I was caching Ryal.

"Unfortunately I made a mistake in the middle sector with a few laps to go, which cost me a chance to challenge for the win."

"It was a hairy moment avoiding Ben, because the car is really loaded up through Turn 6," Price said.

"I had to make a quick call to go onto the grass.

"I had a good dice with Cameron Crick, and it was fun to have a race with someone I could trust."

That left the door open for Price, with Race 1 winner Crick finishing behind his Mitsubishi team-mate, while Walsh dropped back and eventually took fifth.

"I just pushed a bit too hard and lost the rear at Turn 6," Walsh added.

"My focus was on keeping it off the wall, so both Cameron and Toby did a great job to miss me."

Thompson finished sixth, ahead of Ranger Racing's Formosa, who was tagged and spun by the former early.

SuperUtes debutant Madison Dunston finished her second race eighth, while Woods was forced to retire his Toyota after suffering a brake failure.

The third and final race of the weekend starts at 11:15am Sunday.