Mazda driver Ryal Harris has won the inaugural ECB SuperUtes Series, while Tom Alexander took out the final race and round of 2018, at the Coates Hire Newcastle 500.

Harris started the weekend with a 27-point buffer over title rival Craig Woods, which grew marginally to 28 points across the first two races.

Woods had closed the gap after taking third to Harris' seventh in Race 1, but the Mazda driver's lead was restored after he won Sunday's second leg.

After incurring a penalty in Race 2, Woods' title hopes vanished in the finale, when the Penrith Toyota returned to the pits with mechanical dramas.

At the time, he was running third and ahead of Harris, who was left with an easy run to the finish.

Third for the race and round secured the SuperUtes honours, by 38 points over Woods, with each driver's worst round dropped.

"After I lost the [V8 Utes] championship last year, Rod [Dawson], Brett [Peters] and the guys said, ‘we’re going to come back next year and win it’ and we did that today," said Harris.

"All the pressure is now off and we’ve finished the year on a high, so it’s an awesome feeling and very cool to get the job done with EFS on board for the first year as our major sponsor.

"It’s a year that’s had its challenges, especially our mechanical problems at Adelaide and the Gold Coast, and the competition was tight at the front."

Polesitter Alexander's run was made easier when Aaren Russell crashed at the first corner, having started second. 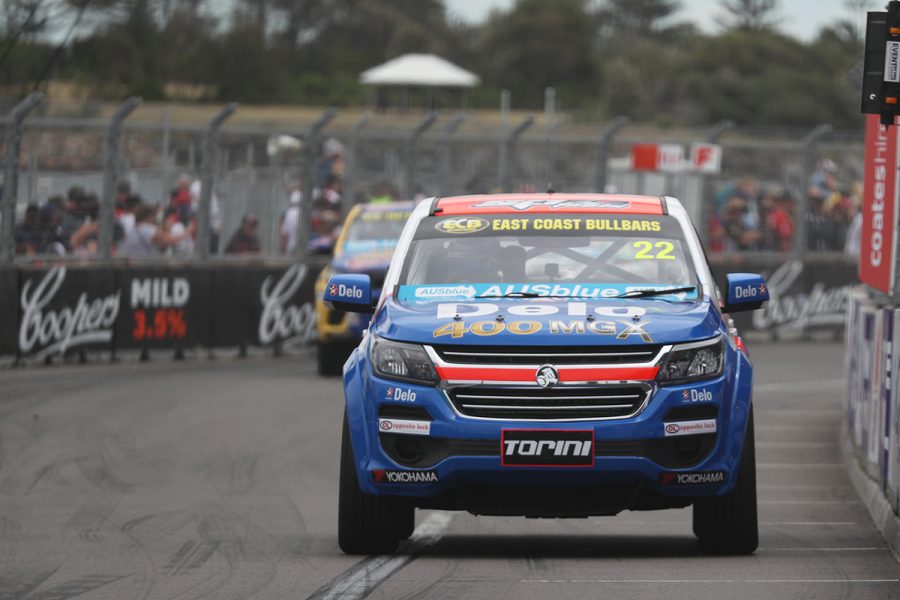 It left the SP Tools Holden Colorado to lead from start to finish, crossing the line 0.7273 seconds clear of Toyota driver Ben Walsh.

After winning the opener and finishing fourth Race 2, it gave Alexander the round win, and third in the standings, 75 points behind Harris.

"The race wasn’t as easy as it looked from the outside – with about four laps to go, the anti-roll bar broke and made it quite difficult to drive," Alexander explained.

"Fortunately, I had enough of a lead that I was able to manage the gap back to Ben.

"This year has had its ups and downs – there were some tracks that didn’t suit our car that well.

"We had a couple of DNFs that hurt us in the title fight, but this is a very good way to finish and repay Ross Stone and his crew for the opportunity."

Russell locked the brakes of his Mitsubishi Triton, ran wide and clouted the Turn 1 wall on the opening lap.

That brought out the Safety Car, with Alexander then withstanding pressure from the Car City Toyota Hilux of Walsh.

"We have been progressing with the car all season and this weekend we kept tuning it up – by the last race, it was about the best it had been all year," said Walsh, who was second for the weekend.

"I didn’t quite have the pace to stay with Tom, and I was focused on keeping Ryal behind.

"We’ve improved throughout the year and with this weekend’s result, we can carry some good momentum into 2019."

Michael Sieders, Charlotte Poynting and Richard Mork rounded out the finishers, with Woods and Russell sidelined.

"The rear suspension sheared off, which wasn’t ideal," Woods said of his race-defining moment.

"We’ve kept the pressure on Ryal all year with our consistency – we didn’t expect to be up the front so quickly, so we exceeded our expectations for the season.

"It’s just a shame we saved our worst round for last."

Christopher Formosa and Steve Wilson were non-starters, Wilson having been involved in a heavy hit earlier in the day.