Harris moved ahead of Dontas at the top of the mountain on the opening lap, leading from that point on and ultimately finishing 6.3 seconds clear.

The race was run in drying conditions after a wet start to the weekend and as a result there was a significant drop in lap times, Harris recording the fastest time of the race and weekend, a 2:47.6999s.

“I knew Craig’s Triton had an advantage going up the hill, and I needed to make a committed move so I could use my car’s strength over the top of the Mountain," Harris said.

“I sent it to the outside at the Cutting and I surprised myself, I was able to carry much more corner speed than I expected.

“Full credit to Craig, he gave me enough room to safely make the pass and then I was able to pull away.”

ARMOR ALL Polesitter Dontas wasn't able to battle with the EFS Mazda of Harris and was forced to settle for second.

“I’m frustrated with myself, it took me too long to work out the grip levels in the dry," Dontas said.

"Ryal’s car was amazing over the top in the first couple of laps and I just couldn’t stay with him.”

Ben Walsh rounded out the podium ahead of Aaron Cameron, that pair having started fifth and sixth.

“In the wet, we were struggling with traction out of Griffin’s Bend and the Cutting, but in the dry they became some of my strongest corners on the track," Walsh said.

“We went out on wet tyre pressures, so I pushed hard early and made up some places, which I was able to hold onto until the end.”

Holden driver Tom Alexander was next, right behind Cameron, having earlier been in a four-way battle with David Sieders, Craig Woods and Kim Jane.

Alexander got the jump on Woods for fifth, before Woods was threatened by Jane and Sieders, the trio running three-wide across the pit-straight on lap four. 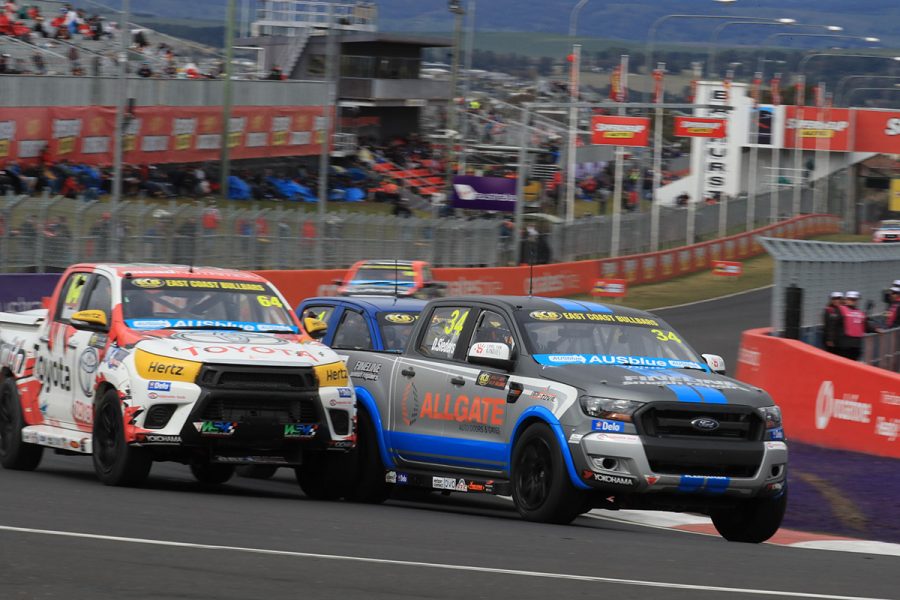 Sieders moved past Jane and then Woods to take sixth, while Woods finished seventh in front of Jane after the pair had a late scrap.

"That was a lot better, it was really fun to drive in the dry," Sieders, making his SuperUtes debut in a new Ford Ranger, said.

“I had a good battle with Craig and Kim, I watched them dicing in front of me and I was able to pick up the pieces.”

Another debutant, in Steve Wilson's Isuzu, Jane said: “It was a lot of fun racing against good guys who can drive.

"Craig, David and I all showed a lot of respect for each other and put on a good race for the fans.”

Sieders' Mitsubishi was scheduled to start fourth but returned to pitlane at the end of the formation lap, making his way back out a lap down.