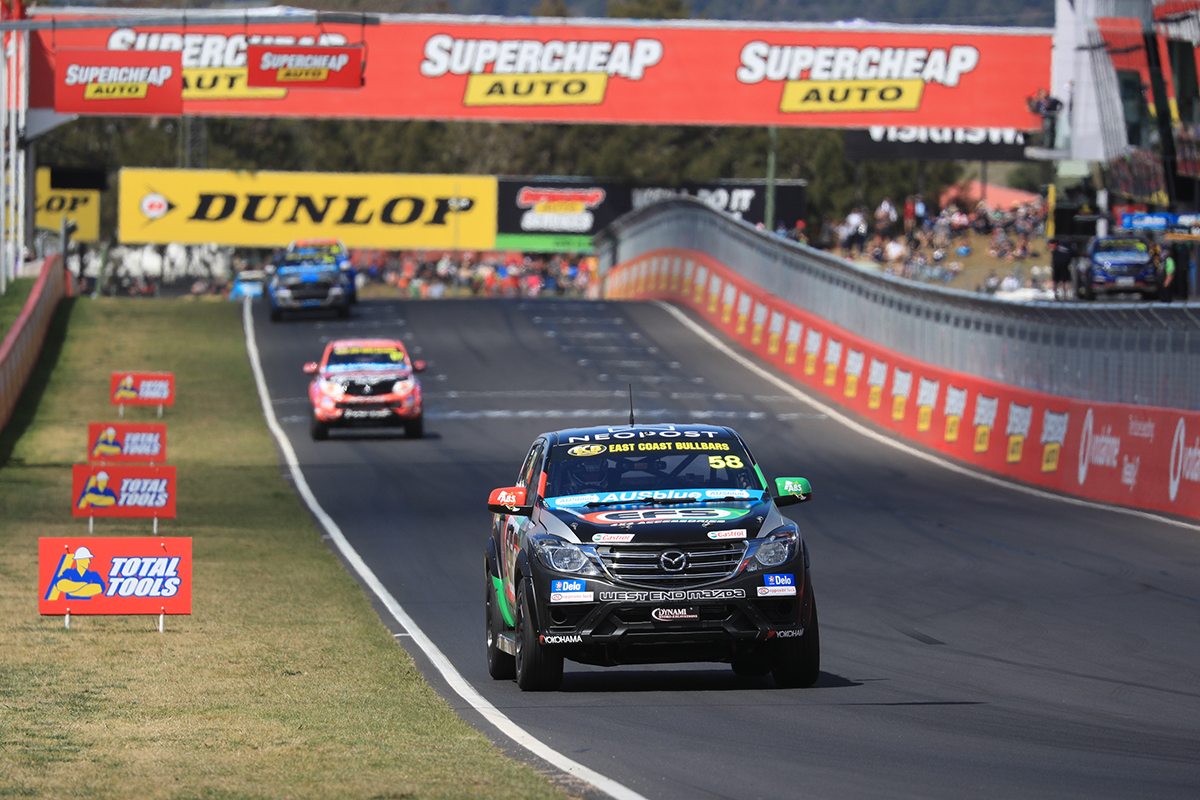 Ryal Harris has completed a clean sweep of the ECB SuperUtes Series Bathurst round, with a commanding victory in the third and final race at Mount Panorama.

Starting from pole position, Harris maintained the form that took him to victories Races 1 and 2.

The EFS 4x4 Mazda led from start to finish, and was ultimately 4.6736 seconds clear of Craig Dontas at the chequered flag.

"I wanted to get through Turn 1 in the lead, so I went really deep under brakes and held Craig out wide," Harris said.

"I knew he was stronger up the hill so I defended into Griffin’s Bend, managed to hold the lead and then pushed hard to build a gap.

"We’ve been close to winning a round quite a few times this year, but we’ve had little issues get in our way.

"This is a great place to break through and to do it with a clean sweep is sensational."

With the weekend's results, Harris has moved into the series lead, by 23 points over Craig Woods.

As was the case all weekend, Dontas finished next best in the factory-backed Mitsubishi Triton and took second for the round.

"About three laps in, I had a turbo actuator problem which was costing me a bit of power," Dontas said.

"I just concentrated on bringing it home and was happy to finish up in second for the weekend. Ryal was just a bit too fast for us today."

SuperUtes debutant David Sieders rounded out the race podium, but missed out on a podium finish for the round by just five points in the new Allgate Ford Ranger.

"In the wet on Thursday and Friday, I was a bit conservative; today I felt a lot more comfortable to push harder," Sieders said.

"It’s been an enjoyable weekend and I’m glad I could help the Ranger Racing team with their car and driver development." 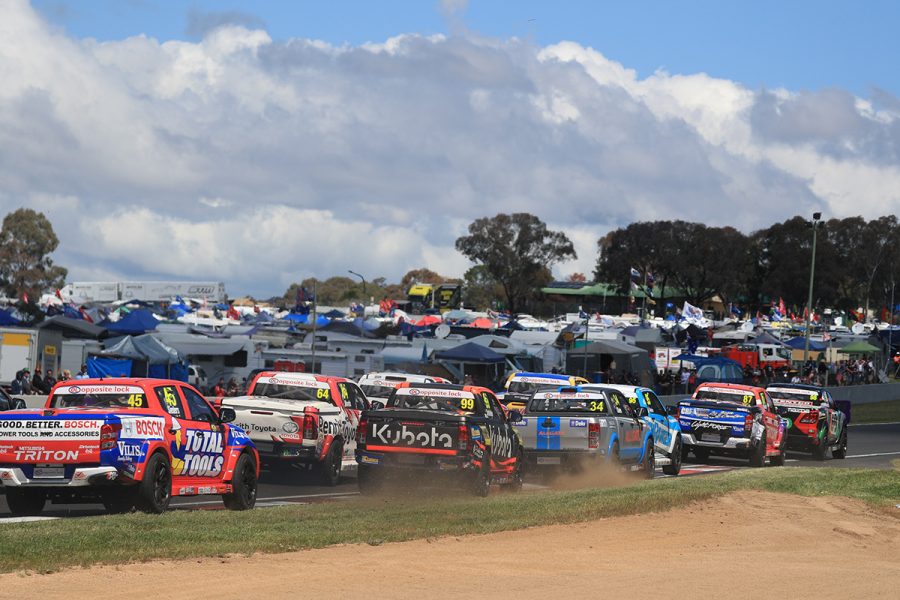 Sieders battled his way up from sixth on the grid via a four-way scrap for third with Tom Alexander, Ben Walsh and Aaron Cameron.

He got the better of that, with Alexander – who had earlier passed Walsh and Cameron – taking fourth.

Walsh recovered from a missed gear on the opening lap that dropped him to eighth, moving back up through the field to take fifth in the race and third for the round.

"I made a good start, but coming out of Hell Corner I missed a gear, which cost me quite a few spots heading up Mountain Straight," Walsh said.

"I had a good battle with David Sieders but at one point we made contact, which damaged my steering slightly.

"It was my own mistake that put me back in the pack, but overall it’s been a good weekend – I’m happy to finish on the podium again and close in on third in the championship."

Cameron finished sixth in the Bushranger Mazda, ahead of former series leader Woods in the Western Sydney Motorsport Hilux.

With two rounds remaining, Cameron, Walsh and Alexander in third, fourth and fifth in the standings are split by
24 points.

Debutant Charlotte Poynting found the tyre barrier at The Esses on the final lap while Tomas Gasperak lost two laps with mechanical dramas.

"I started pushing harder in that race, but turns out I pushed a bit too hard," Poynting said.

"Coming over Skyline, I shifted back to third gear a bit too quickly, which caused a compression lockup and spun me into the wall.

"These SuperUtes are tough, I hardly even felt the impact!"

The ECB SuperUtes Series will resume on October 19-21, as part of the Vodafone Gold Coast 600.