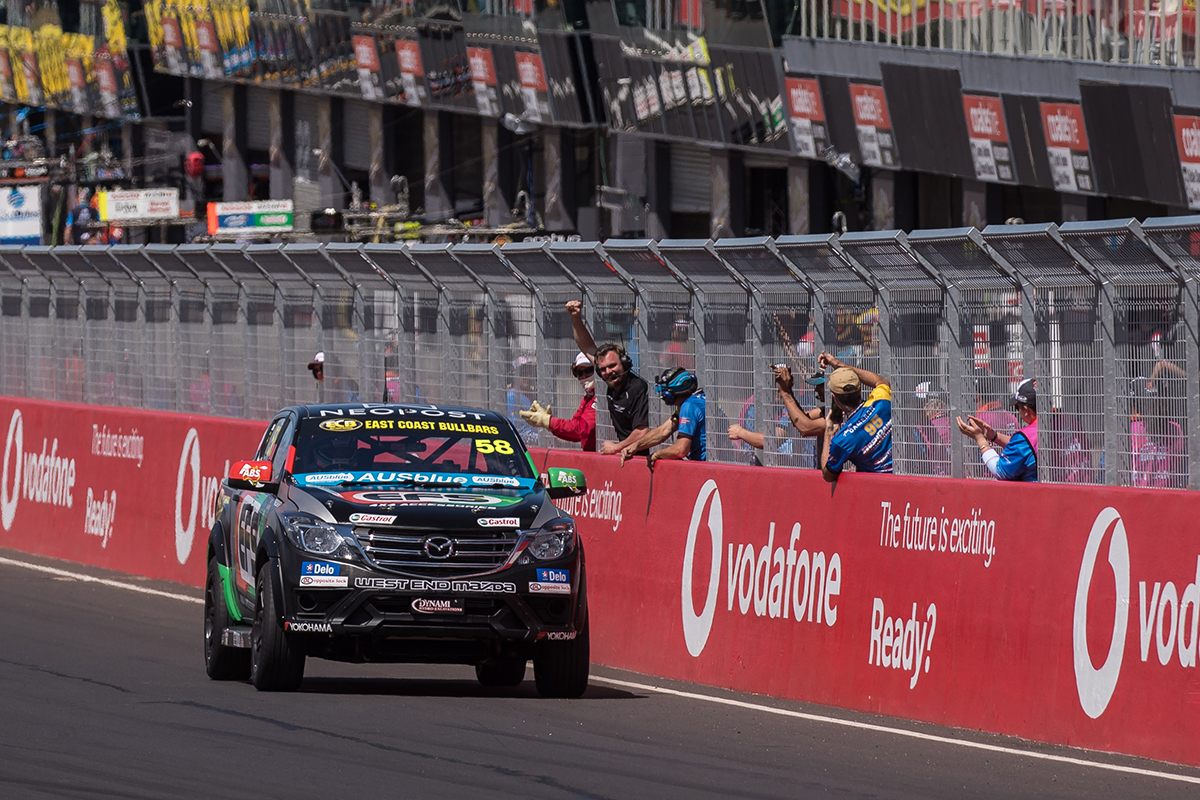 Ryal Harris says he needed a win at Bathurst "more than anything at the moment" to keep his ECB SuperUtes Series title bid alive.

The EFS 4x4 Mazda won all three races at Mount Panorama, Harris' victories slotting him into the series lead with two events remaining.

Harris fell short to Mitsubishi driver Craig Dontas - returning after sitting two rounds out - in practice and ARMOR ALL Qualifying, which were run in wet conditions.

He got past Dontas on the opening lap of Race 1 and won, then carved through the field in the reverse-grid Race 2 and led start-to-finish in the final.

In becoming the first SuperUtes driver to take a clean sweep of a weekend, Harris went from 19 points behind Craig Woods to 23 ahead.

"We needed it more than anything at the moment, we needed to catch back up in the points, which we did and we're now in front," Harris told Supercars.com.

"I love driving around Bathurst, as does everyone, but yeah, I'm really happy.

"We didn't have any dramas with the car, the boys hardly touched it.

"We just fooled around with tyre pressures and basically the thing was just cleaned after every session, checked over and that was it.

"It was really good across the top, you're pretty much flat out, flat through The Chase and then some, they were really stable and they pulled up really well.

"Pole position would have been good, but you can't win them all."

Dontas was Harris' closest challenger in all three races, with the Mitsubishi's practice and qualifying form leaving Harris concerned it would "smash me in the dry".

"Craig doesn't usually go amazing in the wet, so for him to out-qualify me in the rain, I was a bit worried," Harris explained.

"I had to rag the car to get it to do what it did, but I don't normally like driving on the edge like that.

"I thought he would have had a heap more up his sleeve, but we were that quick across the top of the Mountain, I don't think it would have mattered how quick he was up the hill."

A three-time V8 Utes champion, Harris missed out on a fourth title in 2017's final season with a penalty in the Newcastle finale.

With the Gold Coast next weekend and Newcastle next month left on the inaugural SuperUtes calendar, he's keen to make amends for Peters Motorsport.

"I wasn't too happy about losing last year's championship," Harris said of the 2017 V8 Utes showdown.

"I'll just attack it like anything else I reckon, but obviously we won't be doing anything too stupid.

"It would mean a lot to me, the team deserve it, they've put a lot of effort in this year and it would be good to repay them from last year."