Making light work of his competition, Friday winner Harris started from the sixth row alongside Craig Dontas with a reversed-grid and went on to take the chequered flag.

He was into first place by lap three of the six, followed through by Dontas, who he beat by 0.9962 seconds.

With the victory, EFS 4x4 Mazda driver moves into the lead of the series by five points over Craig Woods.

“The original plan coming into the race was to take it easy, because I was thinking about the championship," Harris explained.

“But I felt really confident with the car, so I decided to have a crack. It was very strong under brakes, which made it easier to overtake people than I expected.

“No one’s had a clean-sweep in SuperUtes so far this year, so hopefully I can finish the job in Race 3." 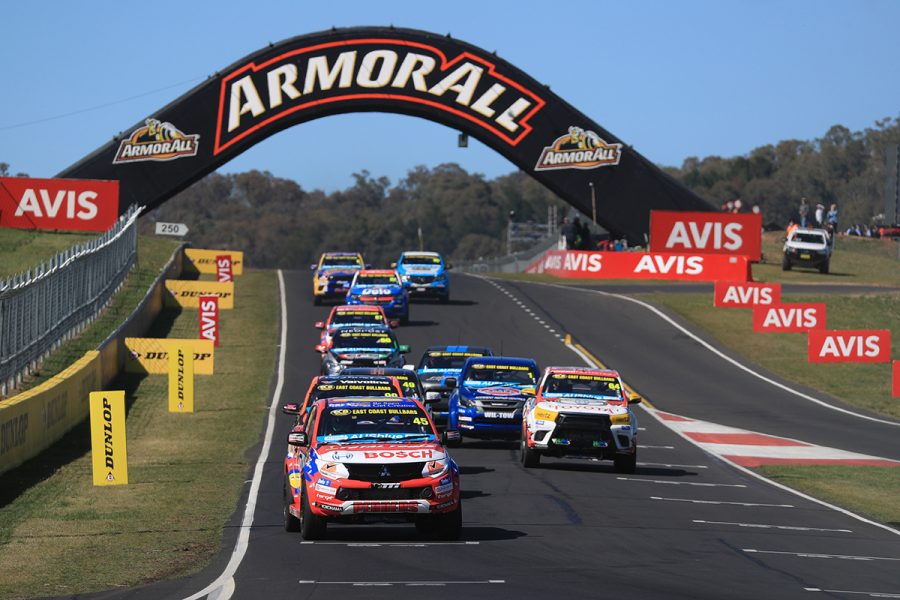 From the rolling start, Micheal Sieders led the opening lap with Matthew MacKelden close behind in second.

By the end of lap one, Harris had already moved into seventh and then found his opportunity to move ahead of MacKelden for second at Murray's Corner on lap two.

Just one turn later, Harris went down the inside of Sieders into Murray's Corner, taking the lead of the race and holding onto the spot from that point onward.

Dontas, who started alongside Harris after finishing second on Friday, followed him through the field and finished runner-up in the factory-backed Mitsubishi Triton.

"I was really exploiting the strengths of the Triton compared to Ryal’s Mazda – my advantage was heading up the hill," said Dontas.

“I improved my lap times compared to yesterday, I had a good run through the traffic and I was able to put some pressure on Ryal in the last couple of laps.”

Ben Walsh gained seven positions from where he started to round out the podium in third, ahead of former series leader Woods, who started from fifth.

“I was held up at the start and lost some positions up Mountain Straight, and I spent a lap-and-a-half dicing with Aaron Cameron," Walsh explained.

“Once I was clear of him, I had good speed with clear track, and I just picked off others one-by-one.”

MacKelden finished sixth, the Kubota Hilux ahead of Tom Alexander and Aaron Cameron in eighth.

“That was the best race I’ve had in SuperUtes – I had some really fun battles," MacKelden said.

"I let some of the faster cars through that were coming from the back of the field, but it was nice to have some door-to-door racing."

Polesitter Michael Sieders lacked pace and had a frightening moment on his way to ninth, grazing the wall on the run into The Chase after going wide onto the grass.

Christopher Formosa rounded out the top 10, ahead of debutant Charlotte Poynting in the Western Sydney Motorsport Hilux.

Kim Jane and Tomas Gasperak both had a blown turbos, and didn't finish the race, with four laps each completed.

The third and final SuperUtes race will commence at 12:50pm Saturday, as part of the Supercheap Auto Bathurst 1000.