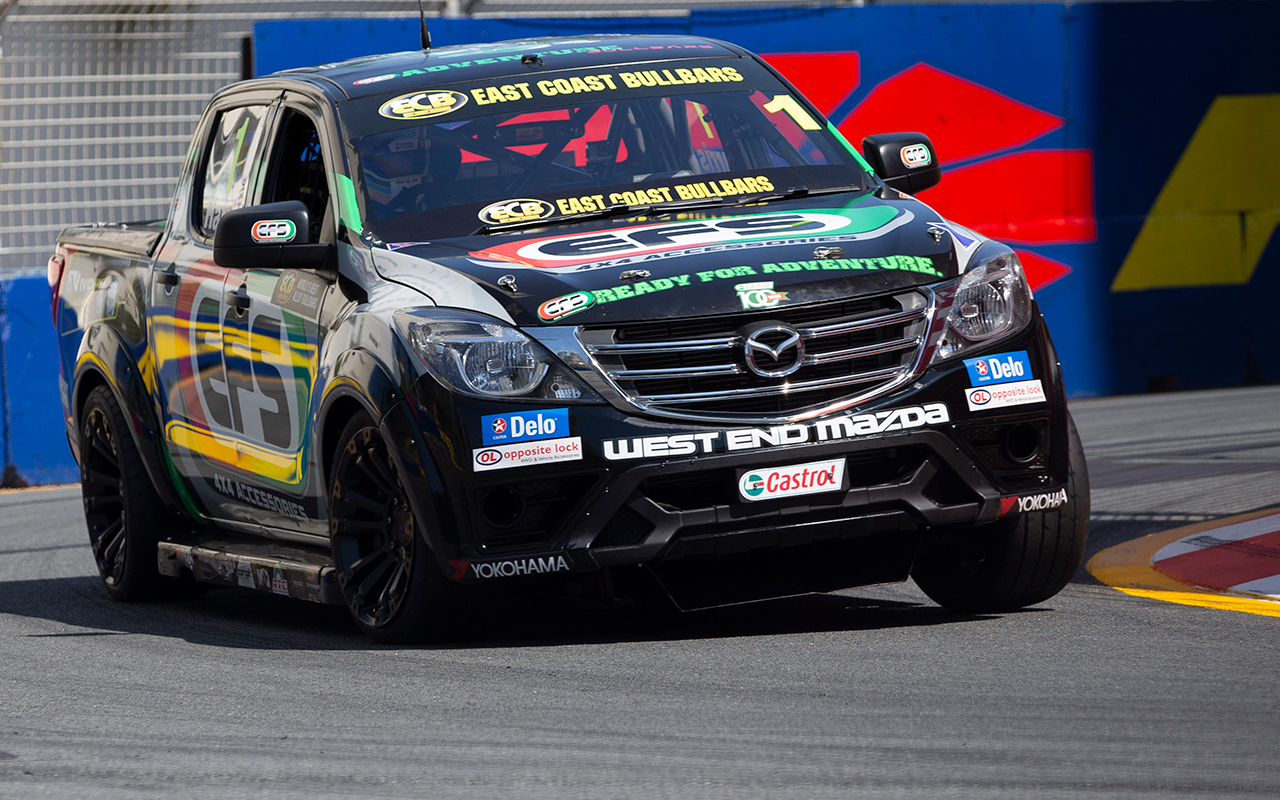 Harris finished the eight-lap affair 1.0607 seconds ahead of Alexander and 4.0307s ahead of Ben Walsh in the Fat Freddy's Toyota Hilux.

It marks a seventh win in 2019 for the EFS 4x4 Mazda driver and the first since the opening race at Queensland Raceway in late-July.

With the results, Alexander continues to lead with a 52 point buffer over second-placed Cameron Crick and a further 38 and 42 clear of Walsh and Harris respectively.

As racing got underway, Alexander led the opening lap, with Harris a close second and applying early pressure, while Walsh held onto third.

The top three remained the same until Harris put a move on Alexander at Turn 4 on the second lap and made it stick for the top spot.

“I knew Ryal was going to have a dive at some point, he’s been strong under brakes all season," Alexander said.

“When he fired down the inside at Turn 4, there was no point fighting too hard.

“With the championship situation, I have a lot more to lose than he does. I was happy to finish second and extend my championship lead.”

From there, Harris was able to hold onto the lead for the remaining laps, taking the chequered flag ahead of Alexander and Walsh.

“We worked on the car after qualifying, and we found some more speed,” Walsh explained.

“I had to drive on the limit to finish third, and I was feeling the pressure from Cameron [Crick] for a few laps.

"Once Craig [Woods] started attacking Cameron [Crick], it allowed me to get a gap.”

Team Triton's Crick finished the race in the same position he started, in fourth and ahead of Western Sydney Motorsport's Woods.

An early charge for Harris' teammate Ben Falk pushed the Mazda BT-50 driver up three positions and into sixth by the second lap, where he'd eventually finish.

“That was the best the Ute has been all weekend, the motor was running well and I made a good start,” Walsh said of his drive.

“I knew I had to pass the other guys early in the race.”

Ranger Racing's Christopher Formosa took ninth, ahead of Mitsubishi driver Jaiden Maggs, who is competing against his father Gerard for the second time this year in SuperUtes.

The on-track action continues Sunday morning with Race 2 at 8:15am local time, followed by the third and final race at 1:10pm.