The pair battled it out throughout the 10-lap race, but Harris ultimately claimed his sixth win from 10 starts this year in his EFS 4x4 Racing Mazda.

Harris took the lead at Turn 5 on the sixth lap and held onto top spot to finish a mere 0.0951 seconds clear of Alexander.

With the victory, he takes the points lead from Craig Woods.

“We didn’t quite have the straight-line speed of Tom, but I knew I was stronger under brakes and I was able to surprise him at Turn 6," said Harris.

“In these SuperUtes, you need to keep the corner speed up, so it took me a few corners to complete the move.

“It’s good to take the championship lead but obviously there’s still a long way to go.”

“I made a mistake out of Turn 4, which cost me speed out of Turn 5 and allowed Ryal down the inside into Turn 6," Alexander added.

“After that, Ryal drove very defensively, too much so in my view and he got a bad sportsmanship flag."

Woods took the final spot on the podium aboard the Penrith Toyota Hilux, the same position he started the race in.

“We had plenty of pace, but the engine started to overheat and we lost some power, said Woods.

“I had a great view of the battle for the lead, so it was a shame I couldn’t get close enough to be part of it.” 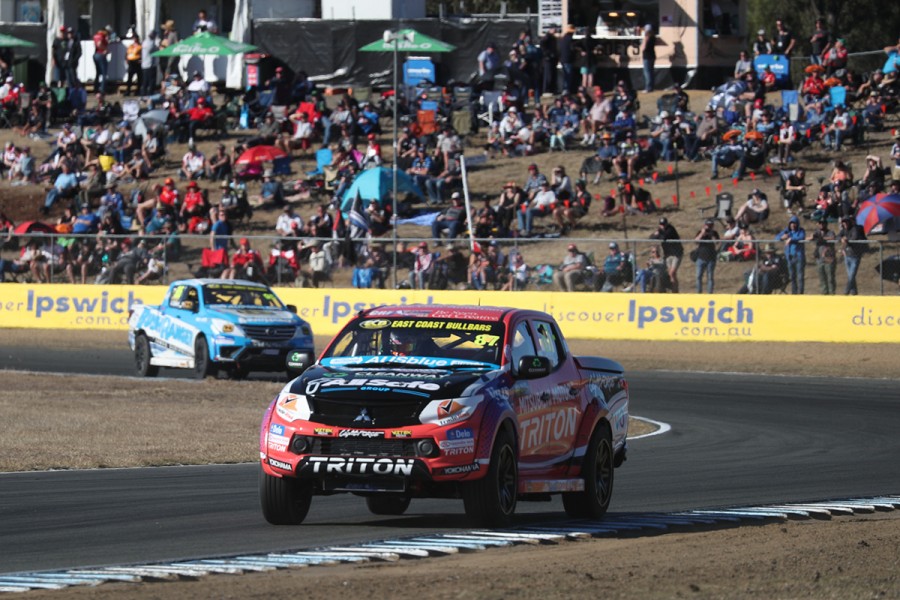 Crick, in Toby Price's regular #87 entry, came from the rear of the grid after an off in ARMOR ALL Qualifying.

“I made a great start and gained a few positions on the opening lap; a few people made mistakes as well, so I made up some spots quite easily," Crick added.

“I’m still learning how to drive the SuperUte so to come from the back of the grid to fifth, I’m happy with that.”

Aaron Cameron bounced back after a violent rollover in Friday's practice to finish seventh aboard the Bushranger Racing Mazda BT-50.

Ben Walsh started fourth but fell to the rear of the field on lap two and stayed there.