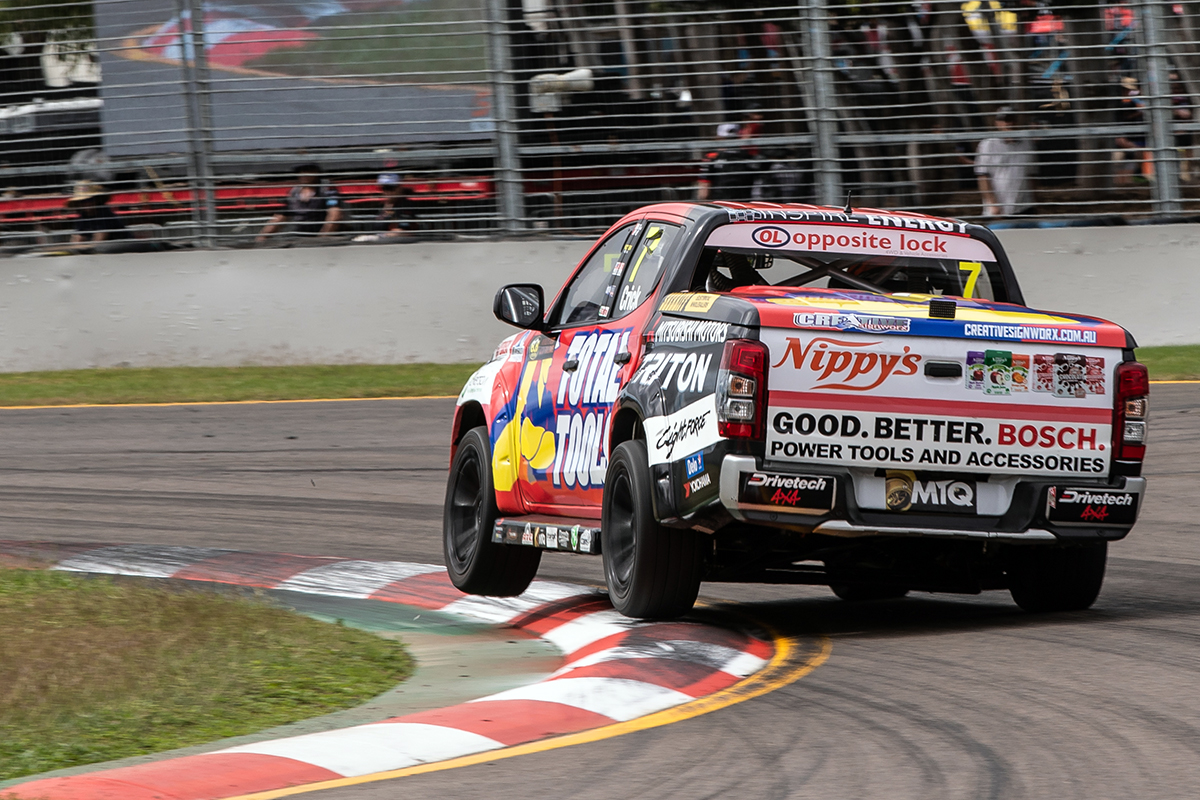 Crick is the form driver in the series after winning the last two events, at Winton in May and Townsville last weekend.

His first full season in the turbo-diesel class got off to a rough start, though, leaving Adelaide's opener sixth in the points.

The factory-backed Mitsubishi then lost an engine during first practice for Round 2 in Perth, forcing the team to replace the blown motor with a fresh unit.

Issues were ultimately completely resolved for Crick to finish Races 2 and 3 at Barbagallo Wanneroo Raceway fourth and third.

The 21-year-old then claimed a maiden ARMOR ALL Pole, race win and round win at Winton.

In Townsville, he repeated the pole and round win feats, winning two of the three races.

"It was a little bit frustrating at the start of the year," Crick told Supercars.com.

"We had to change an engine over in Perth and once that happened we were quite competitive.

"In Adelaide we had a fair amount of turbo issues and I probably wasn't quite in-tune with the car, brake bias and everything.

"To turn things around, you start getting a bit more confident in the whole program and with yourself.

"Now the car balance feels quite nice on the new tyre [introduced by SuperUtes at Winton].

"I guess that's sort of a general trait, if you have good results, you just keep trying to build on that."

In Townsville, Crick won Races 1 and 3 and finished fourth in the reverse-grid affair to secure the round honours.

"The car was quite good straight out of the box, even in the wet in practice and then we backed it up with a pole," he said.

"To win Race 1 and 3, get the lap record and win the round, I'm just mostly happy for all the sponsors and partners that have invested in our program.

"There were so many sponsors in and around the event, with the Mitsubishi dealership up there and the Total Tools store, and to reward everyone involved was probably the most pleasing thing for me." Team Triton started 2019 with a full-time line-up of Crick and Elliot Barbour, who only trailed Alexander by eight points after two rounds.

However Barbour has been sidelined by a broken ankle since and is targeting a Bathurst return, leaving Crick mounting the Mitsubishi title bid, heading to the Century Batteries Ipswich SuperSprint on July 26-28.

"You think about it here and there, but to be honest I'm just taking it round-by-round and maximising at each individual event," Crick said of his title hopes.

"There's still with four rounds to go and a few street circuits to go, honestly anything can happen, so I'm not really thinking about it too much at the moment.

"It would be great to keep reeling those guys in, but we'll just try and do what we did in Townsville at Queensland Raceway, and just continue to form and see where we end up."

Running alongside Crick, two-time Dakar Rally winner Toby Price finished third in the Winton and Townsville events, taking a race win at the former, and is fifth in the points on a partial program.