Craig Dontas claimed a maiden victory for himself and Mitsubishi’s Triton in the first race for Round 3 of the 2018 ECB SuperUtes Series in Townsville.

Dontas led from start-to-finish, making the most of his ARMOR ALL Pole Position, ultimately finishing 3.4 seconds clear.

Elliot Barbour was initially Dontas' closest competitor, and gave chase until his factory-backed Mitsubishi Triton slowed on the second-last lap due to a blown turbo hose.

“I was a bit challenged at the start, the Ranger [of Christopher Formosa] made a really good launch so I had to defend in the first couple of corners,” Dontas said.

“After that, I just managed the gap back to Elliot – it’s a shame he had the issue because it would have been a good battle between us.

“It’s obviously great to pick up the win, after the start we’ve had to the season, we’ll take these where we can get them.

“Coming through the field with the full reverse-grid tomorrow is going to be challenging, but should be fun for the crowd.”

SuperUtes newcomer Barbour returned to the pits and finished eighth, gifting second to Christopher Formosa, who started sixth and made his way through the field.

Following suit, Aaron Cameron made his way from fifth to finish third, battling back-and-forth with Formosa, before the Ford driver, below, got the better of that battle.

“I made a really good start and decided to go to the outside into Turn 2, which worked for me because everyone was slowing down on the inside,” Formosa said.

“I made a couple of small mistakes which allowed Aaron [Cameron] to catch up, and he passed me a couple of times but I had the straight-line speed to get back ahead.

“We’ve made a big improvement in speed this weekend, and it’s hard to say exactly where it’s come from – I think it’s a number of gains we’ve made in quite a few areas.” 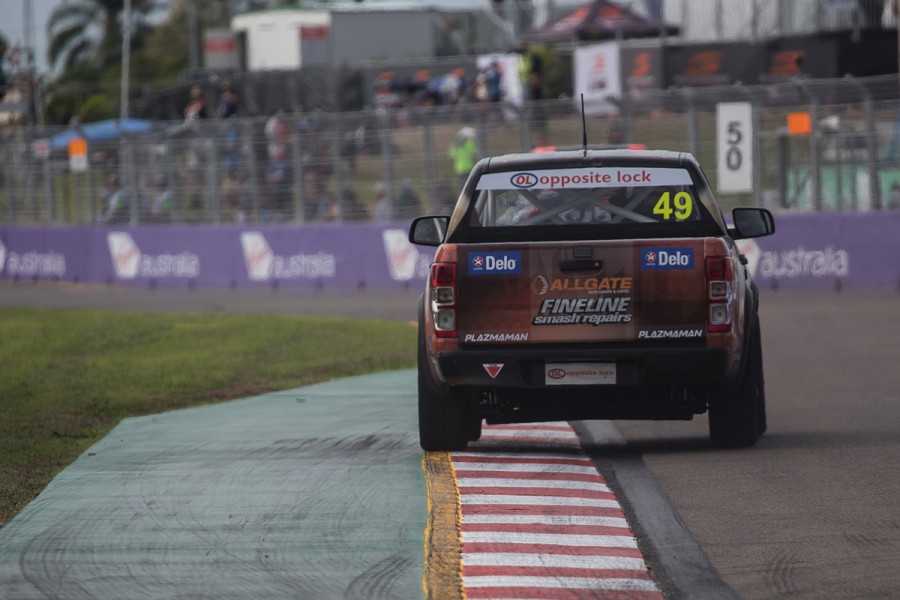 Mazda driver Ryal Harris was set to start third, but headed to pitlane at the end of the formation lap.

Harris completed eight laps, with another trip to the pits, before retiring from the back of the field.

Matthew MacKelden had the only on-track incident, when his Toyota Hilux skipped out and found the wall at Turn 6 on the opening lap.

MacKelden made heavy contact with tyre barrier, but was able to continue and finished ninth.

“We made some changes to the car for that race and it was turning in a lot better, but the rear was more unsettled,” MacKelden said.

“I made a good start and was racing with the front pack, but at Turn 6 I ran wide and once I hit the grass, it was all over.

“The damage is just cosmetic – the steering isn’t even bent which is unbelievable considering the size and force of the impact.

“It’s a real testimony to the strength of these SuperUtes that we were able to finish the race.”

The second race will commence at 10:20am local time on Sunday morning, followed by the third and final race of the weekend at 12:10pm.