Cameron Crick has taken out the fourth round of the 2019 ECB SuperUtes Series, with victory in the third and final race at the Watpac Townsville 400.

After finishing first and fourth in the opening two races, Crick completed his weekend with a second win, to claim the overall spoils.

The Team Triton driver finished 2.4790 seconds ahead of defending champion Ryal Harris, who took second for the race and round.

It follows Crick's maiden race and round win last time out at Winton.

With the weekend's results, Tom Alexander continues to lead the series, 56 points ahead of Harris and a further 66 clear of Crick in third.

"Ryal was applying the pressure to me early, but I hit my marks and was able to build a gap," Crick said.

"It’s been a very good couple of rounds for us, and we’ve worked our way into a good championship position.

"I feel like we’re genuinely in title contention now." 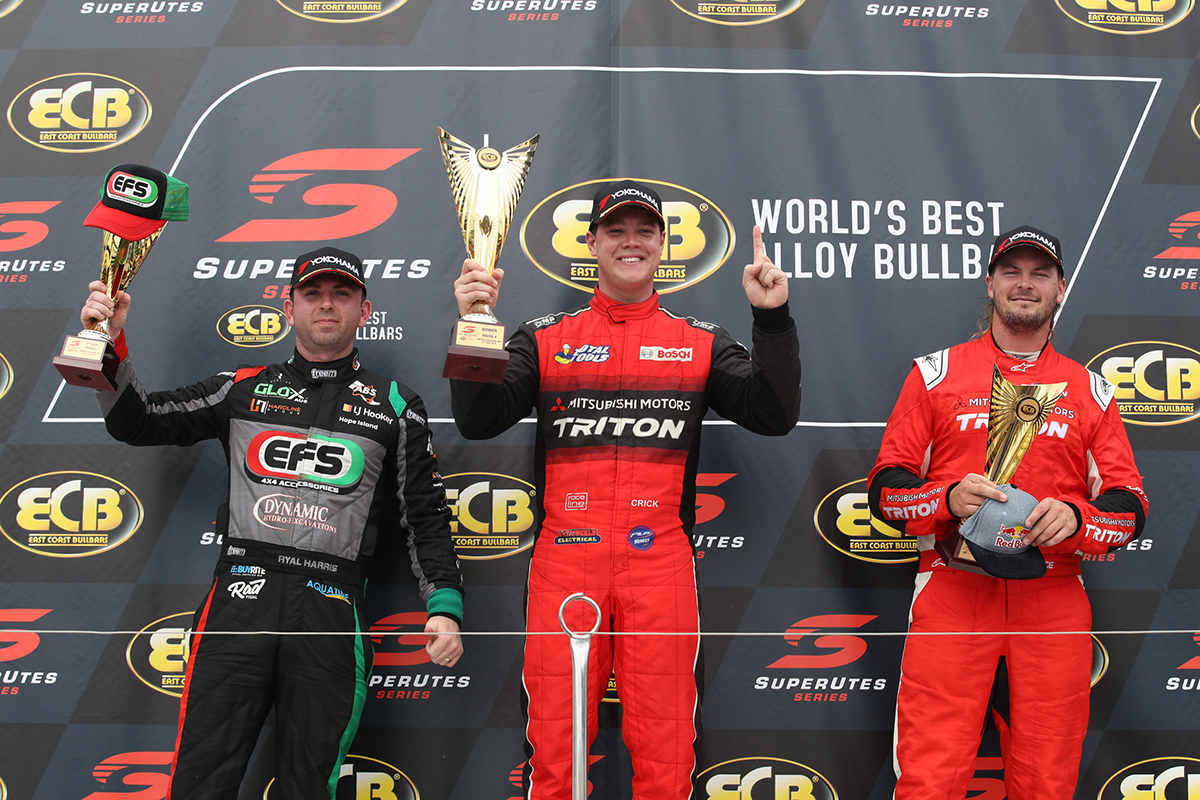 From the rolling start, Crick got a smooth getaway and controlled proceedings throughout, holding onto the top spot for the entire 11-lap affair.

Harris applied pressure in his EFS 4x4 Mazda, but couldn't find a way past the factory-backed Mitsubishi Triton, eventually settling for second.

"We didn’t quite have the pace of the Tritons, but we still scored some good points and finished ahead of Tom, which was important for the championship.

"We head to our home track at Queensland Raceway next, so we should be strong there."

Two-time Dakar Rally winner Toby Price finished third for both the race and round, having taken finishes of second and third in the opening two races.

"I'm really happy to finish with another podium finish, Townsville is a fun track and it’s been a great weekend for Team Triton," Price said.

Alexander fell to seventh after tagging the rear of Harris on the run into Turn 2 on the opening lap, the Isuzu D-MAX driver battling back to finish fourth.

"I covered the inside line into Turn 2 behind Ryal, jumped on the brakes and had a bit of a hit from Ben [Walsh]," Alexander explained.

"The engine actually stalled and I had to re-fire it, which cost me a lot of time and positions.

"The Ute wasn’t as good as Race 2, but I was able to work my way back to fourth and score some valuable points in the championship."

Ben Walsh was fifth, the same position he started the race in aboard the Fat Freddy's Toyota Hilux, having battled Alexander for fourth for the bulk of the race.

In another Toyota, Craig Woods made his way from last to sixth, after retiring from the second leg due to a brake failure.

Thompson and Formosa were in a fierce battle for seventh, the latter handed a 15-second penalty for spinning Thompson.

The fifth round of the ECB SuperUtes Series will take place on July 26-28, as part of the Century Batteries Ipswich SuperSprint.