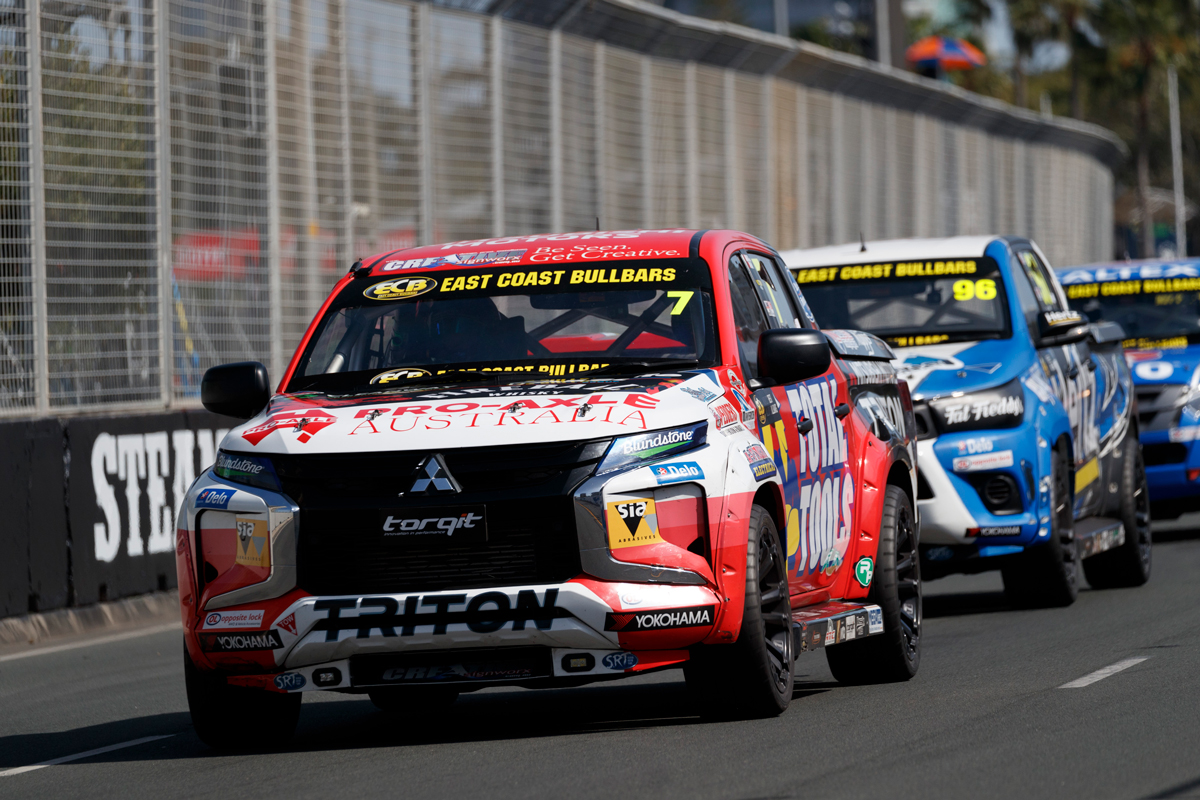 Team Triton’s Cameron Crick held off a late-charging Ryal Harris to win an incident-packed second leg of the ECB SuperUtes Series at the Vodafone Gold Coast 600.

The Mitsubishi driver started sixth with a reverse-grid from the Race 1 results and went on to take the chequered flag just 0.1684 seconds clear of Harris.

He moved to the lead through the opening set of chicanes on the first lap, after a mega start that elevated him ahead of front-row starters Jaiden Maggs and teammate Toby Price.

Despite a late charge from Peters Motorsport’s Harris, Crick managed to defend his lead and held onto the top spot for the entirety.

It marks a fifth career race win for Crick, who took back-to-back round honours earlier in the season at Winton and Townsville.

“There was obviously some carnage in the first chicane, so I concentrated on dodging it and managed to come out in the race lead," Crick said.

“The Triton was better than yesterday, but I used up all my kerb strikes so I had to be very conservative at the end, and Ryal was coming at me very quickly.

“I’m starting in a reasonable spot for the last race, but I need to stay close to Tom to give myself the best chance of taking the title fight to Newcastle.”

From the rolling start, Crick quickly slotted by Maggs and Price through the first set of chicanes, before trouble struck for the two-time Dakar Rally winner exiting Turn 3.

Ben Falk tagged the left-rear of Price exiting the final turn within the sequence, sending Price into the left-side concrete and out of the race.

Moments later, Toyota driver Gerard Maggs got into the rear of Falk at Turn 4, which spun the Mazda BT-50 driver and dropped him to the rear of the grid.

Adding to the early carnage, Maggs then missed the apex and clouted the tyre barrier nose-first at Turn 11, leaving Ben Walsh and Craig Woods with nowhere to go.

Walsh was forced to join Maggs in the tyres, unable to make the turn, while Woods slammed into the rear of Maggs, putting both drivers out of contention.

The Safety Car was brought out and racing resumed with four laps to go, Crick controlling the field off the restart, with Jaiden Maggs and Tom Alexander second and third respectively.

The series leader made short work of Maggs, slotting by at the Turn 1 chicane, with Harris following suit and getting the job done on Maggs moments later.

At that stage, the top three was Crick, Alexander and Harris, before the EFS 4x4 Mazda driver pipped the series leader at Turn 1 on the sixth lap.

Crick held the lead by more than 2.5s at that point; Harris was able to close the gap after setting multiple top times, including a race record-breaking 1:31.0388s lap.

Harris charged late and was right on the tail of Crick through the final sequence of turns, but ultimately couldn’t get the job done, as Crick took the chequered flag.

Alexander held on for third, ahead of Jaiden Maggs, Falk, Walsh and Christopher Formosa, who spun and tagged the wall at Turn 12 on the final lap, after contact with Falk.

Gerard Maggs, Woods and Price were all non-finishers after their opening lap dramas.

The third and final race of the weekend takes place at 1:10pm local time.