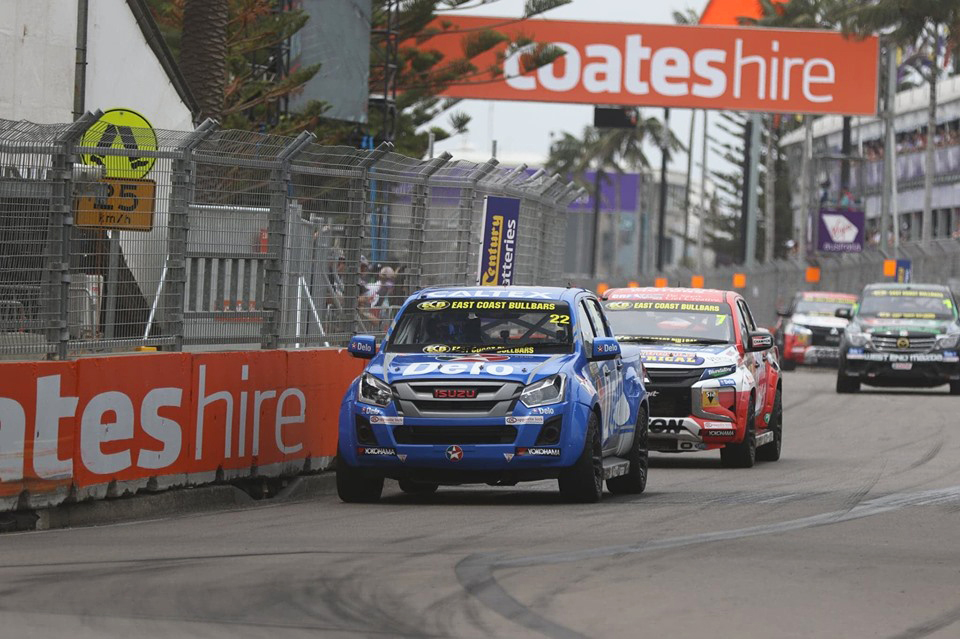 Ross Stone Racing's Tom Alexander has held off Cameron Crick to win the opening ECB SuperUtes Series race at the Coates Hire Newcastle 500 and make the title a two-horse race.

The Kiwi driver finished the 10-lap affair, shortened by one lap, 2.1654 seconds ahead of Crick and 5.5125 seconds up the road from defending champion Ryal Harris.

It marks a fifth win in 2019 for the series leader, who looks set to claim a maiden championship in the category’s second season, with two races remaining.

With the win, Alexander extends his lead to 69 points ahead of Crick and a further 40 clear of third-placed Harris, with no more than 105 points on offer across the final two races.

That means Harris and Ben Walsh are now out of title race and it'll come down to a two-way battle between Alexander and Crick.

As racing got underway, Alexander led the opening lap, with Crick a close second after getting by Harris at Turn 2.

The top three would remain the same throughout the entirety, despite Crick's best efforts.

“It might have looked easy from the outside, but Cam kept pushing hard so I couldn’t relax or make any mistakes,” Alexander said.

“I love this track – we were fast here last year, and the Isuzu has been excellent this weekend.

“We’ve extended a nice points buffer, but the reverse-grid race tomorrow will be interesting.”

Added Harris: “The power steering failed on the formation lap, and it really wasn’t nice to drive after that – it was extremely hard work… I did well to bring it home in third.”

Trouble struck early for Craig Woods, who was tagged by Elliot Barbour and sent into the right-side concrete barriers at Turn 7 on the opening lap.

Woods returned to the pits and retired from the race with substantial front-end damage, while Barbour copped a 15-second time penalty.

“On the first lap, Craig turned across the front of me at Turn 7 and unfortunately we made contact,” Barbour said of the incident.

Barbour crossed the line in fifth and despite his infringement, still managed to hold onto the place, having gained enough time over debutant Layton Barker in sixth.

Starting from sixth on the grid, Walsh moved his way up into fourth, which included a fierce battle with Barbour through Turns 4, 5 and 6, with the Fat Freddy's entry edging ahead into Turn 7.

The reverse-grid second leg will take place at 10:10am Sunday morning, followed by the final race of the 2019 season at 2:15pm.