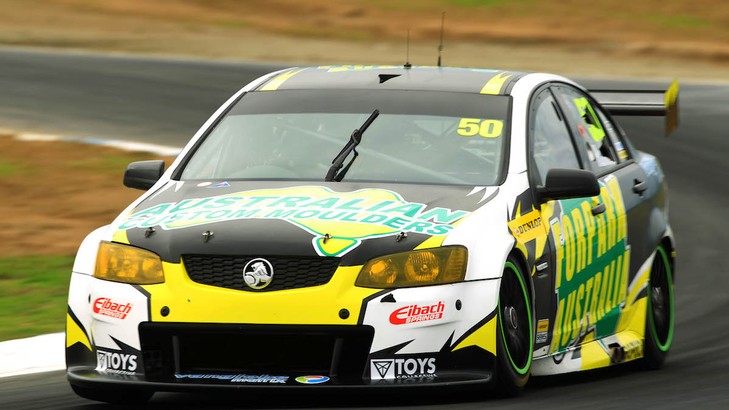 GMJ Motorsport enjoyed an encouraging weekend in Round Two of the Dunlop Series at Winton, its three drivers showing improvements across an incident-filled practice, qualifying and the two 25 lap races.

Matt Hansen (Forpark Australia/Australian Custom Moulders Commodore) and Jim Pollicina (MoComm Falcon) both recovered well from setbacks in the races, while the experienced Geoff Emery (R & J Batteries Commodore) improved his position in each race, narrowly missing a top 10 finish in the final.

In practice, all three drivers complained of a lack of grip, due to the sealant on the circuit surface disintegrating. The conditions improved for the second session, but the potential for improvement in lap times was affected by red flags.

“There was no grip in the first session, and then in the second session the car felt really good, and we put new tyres on but then the red flag came out,” Hansen said.

“When the session restarted, it started to rain so we weren’t able to improve.”

Qualifying was more productive for Hansen, who qualified his Forpark Australia Commodore 19th, just a couple of positions behind Emery.

“We made some errors in qualifying which was a shame, because the car is clearly fast this weekend,” Emery said.

Pollicina qualified his MoComm Falcon 29th, continuing to improve with every lap he completed.

Race One was unaffected by Safety Car interventions and Emery used his experience to elevate the R & J Batteries Commodore to 13th.

“Unfortunately, I made a couple of errors which is a shame, because I was aiming at a top 10 finish and a good starting position for Race Two, the top 10 reverse-grid race, which I won last year.”

Hansen was involved in a tangle with another competitor at turn five and went cross-country to rejoin the track at turn eight. He crossed the finish line in 18th, but was relegated to 21st with a post-race penalty for the short cut.

“The pace was good, so it was disappointing to get caught up in the incident,” Hansen said

“Thankfully there was no serious damage to the Forpark Australia Commodore.”

“I’m learning more about the car and the track with every lap I complete, so it was important to ensure the MoComm Falcon completed the full race distance, which we were able to do today,” Pollicina said.

In Race Two, Emery made a blinder start, moving into the top 10 on the first lap. Hansen found himself bundled down the order after a touch from another competitor, while Pollicina avoided the drama to move up to 21st.

A mid-race Safety Car compressed the field, and at the restart Emery was struck from behind, losing a couple of positions.

Meanwhile, Hansen began staging a strong recovery, albeit with a bit of friendly fire when he collided with Pollicina on his way through the field.

“It was an unfortunate incident, but thankfully we both emerged relatively unscathed,” Pollicina said.

The next round of the Dunlop Series is at Barbagallo Raceway at the  Perth 400, from May 16-18.

Owen to start from pole

Two from two for Waters

04/04/2014
Related Content
Points tight after Walsh wins Winton  ›
08/04/2014
Geoff Emery  ›
Matt Hansen  ›
Stay In The Know
Sign up to the Repco Supercars Championship Newsletter
We use cookies to ensure that we give you the best experience on our website. If you continue to use this site we will assume that you are happy with it.Ok