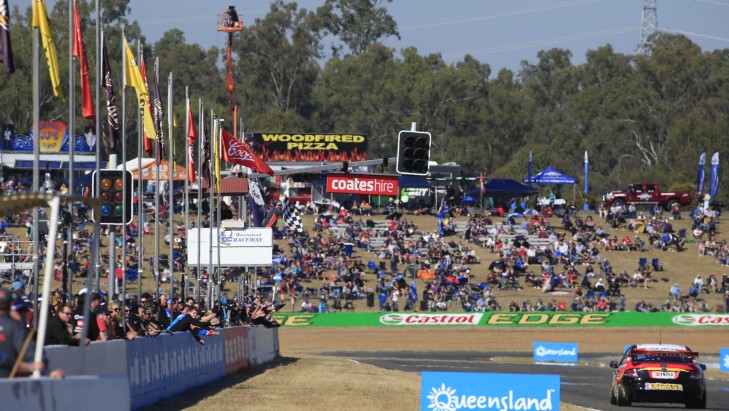 Prodrive Racing Australia's Cameron Waters has taken the chequered flag in race two at the Coates Hire Ipswich SuperSprint, but his win is pending investigation after his safety car restart procedure during the 19-lapper.

As the safety car left the circuit after James Golding and Jesse Dixon's clash towards the end of the race, Waters began gapping a second-placed Andrew Jones before the last turn.

The restart is under investigation after the Prodrive Racing Australia young gun crossed the linewith a 1.3 second margin to Jones, who secured second place on the first lap after getting the jump on Jack Le Brocq, who finished third.

Dixon and Golding were on for a top ten finish before their clash, but a lock up by Golding at the last turn on lap 15saw him spear into Dixon, landing them both in the gravel trap.

While Dixon managed to escape the gravel trap, recovering to take 13th, Golding had to be retrieved from the sand, finishing three laps down in 19th.

Brad Jones Racing teammates Macauley Jones and Josh Kean were locked in a mid-pack battle towards the end of a race, with the latter spearing off the track at turn four on lap 18 after entering the corner too hot.

Renee Gracie recorded her first DNF in the category after getting bogged at turn two with one lap remaining, while Aaren Russell was forced to end the racewhen he was dealt a mechanical black flag for an oil pump failure.

The Dunlop Series will return to Queensland Raceway this afternoon for race three at 12.40pm.