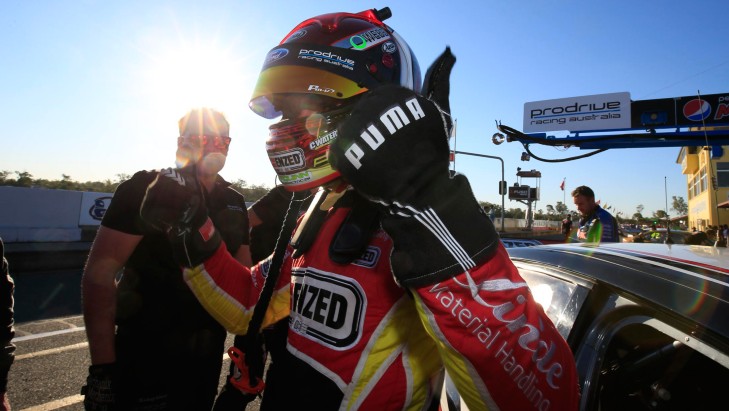 Cameron Waters has completed another lights-to-flag victory at the Coates Hire Ipswich SuperSprint, beating out Jack Le Brocq in the first race of the weekend.

The pilot of the Team ENZED Falcon secured the race lead by the first corner, holding the position for the entirety of the 19-lapper to claim his ninth win of the season and be awared another 150 points to his series campaign.

Jack Le Brocq trailed Waters to the chequered flag in second, but managed to keep the pressure on the Prodrive Racing Australia racerthroughout the race, trailing him homeby 1.9 seconds.

Paul Dumbrell finished where he started in third, while Andrew Jones held off a charging Chris Pither to finish the race in fourth, with Pither in fifth.

After an epic battle with Simon Evans and James Golding, Jesse Dixon rounded out the top ten, behind Aaren Russell in ninth.

Shae Davies and Josh Kean were locked in a tight battle at the race's mid-point, with Davies prevailing to take 13th place while Kean was 14th.

After starting the race from 12th on the grid, Macauley Jones was forced off the track in the opening laps at turn three. He was dragged to the back of the field, but recovered to finish in 16th.

Other notable mentions include Renee Gracie in 17th, while Paul Morris Motorsport stablemate Bryce Fullwood recorded a DNF after sustaining damage when he ventured off the circuit at turn one towards the end of the race.

The Dunlop Series return to Queensland Raceway tomorrow for two races, the first kicking off at 9.30am ahead of the final 19-lapper at 12.40pm.