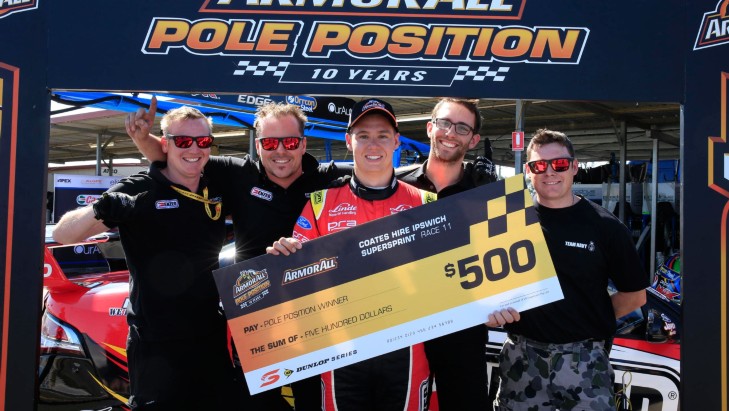 Cameron Waters has pipped Jack le Brocq in qualifying this morning, securing ARMOR ALL Pole Position for this afternoon's race at the Coates Hire Ipswich SuperSprint.

The Prodrive Racing Australia pilot jumped to the top spot within his first two laps, holding the position for the duration of group two's qualifying as he continued to lower his time.

His time of a 1min10.69 set on his seventh flyer secured him pole position, with Le Brocq trailing the Team Enzed racer by 0.15secs.

Le Brocq will start alongside Waters on the front row ahead of Paul Dumbrell in third and Chris Pither in fourth.

Andrew Jones was the fastest ofthe Brad Jones Racing stable in the session, rounding out the top five and followed by Todd Hazelwood, Garry Jacobson and Ant Pedersen.

James Golding and Aaren Russell rounded out the top ten - Russell as the fastest driver from the group one qualifying session.

Jesse Dixon was just outside the top ten in 11th, ahead of Macauley Jones, Shae Davies and Bryce Fullwood.

Simon Evans will start from 15th on the grid, alongside Renee Gracie in 16th.

Phil Woodbury qualifying 18th on his return to the category, ahead of RSport stablemate Brett Hobson.

The Dunlop Series will line up for race one at the Coates Hire Ipswich SuperSprint today at 3.30pm.