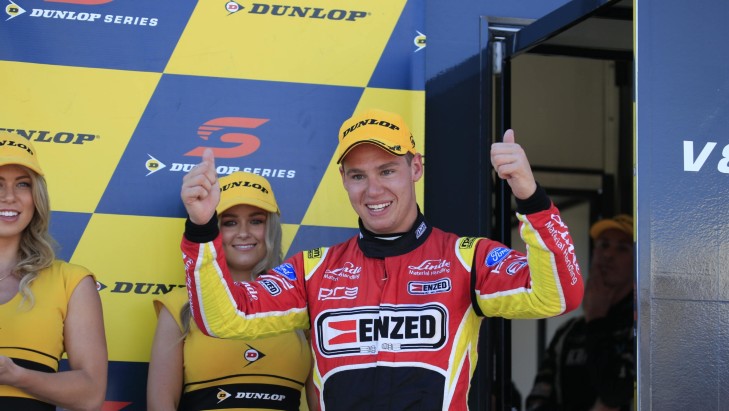 Cameron Waters has today shut down criticism his Prodrive Falcon is the reason for his domination of the V8 Supercars Dunlop Series, after the young gun recovered from a harsh penalty to finish third in the final race at the Coates Hire Ipswich SuperSprint.

Following his race two win this morning, the 20-year-old was dealt a 10 grid spot penalty after the stewards foundhe had accelerated before the green flag during the safety car restart.

But starting from 11th on the grid the following race proved to not be a heavy hindrance for the Team ENZED pilot, having made up two spots within the first lap and making his way up to fourth by the race's midpoint.

In the closing laps the PRA racer began drawing in a second-placed Dumbrell, but third place was all Waters could salvage - his worst race result of the year, having not finished lower than second this season to-date.

Waters' impressive charge today comes after a fellow competitor implied his recent success is due to the strength of his Prodrive Racing Australia package.

But today's efforts has proved his doubters wrong, with Waters showing he's a capable racer when stuck in traffic, having spentthe majority of the season at the front and gapping the field.

"I just picked my moments and used the strength of the car and got through relatively easily," Waters explained of his fruitful drive.

"When I got to third, PD and Chris Pither were a fair way up the road, so I just put my head down and chased them down.

"It was pretty good passing a few cars for a change... and I had a bit of fun doing it, so it wasn't all bad for me."

While he managed to recover well from the penalty, Waters believed he didn't deserve the disadvantage for his actions in race two.

"I didn't agree with it, obviously. I have my take on the incident from race two and obviously Bargs [Jason Bargwanna, V8 Supercars Driving Standards Observer] had his, and Bargs is always going to win isn't he," he laughed.

"I just had to cop it on the chin and start 11th, [the drive] probably looked good on the television, so it was alright."

After winning the weekend's first two races, Waters' third place finish today was enough to secure him the round win and hold on to his series lead over Dumbrell by 173 points.

"I'm pretty happy. To get third in that race and win the weekend, I couldn't be happier."

While the Dunlop Series has a substantial waituntil the series resumes at the Supercheap Auto Bathurst 1000, Waters will have plenty of time in the seat as Chaz Mostert's co-driver for the upcoming PIRTEK Enduro Cup.

Make sure you're trackside to witness the sixth round of the series at the Supercheap Auto Bathurst 1000. Book your tickets now at ticketek.com.au.