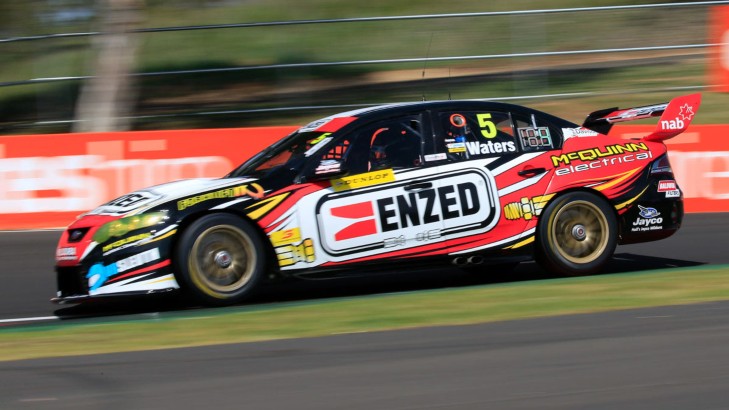 Having only been beaten three times in 2015, Cameron Waters produced an uncharacteristic result in first practice this morning at the Supercheap Auto Bathurst 1000.

The Prodrive Racing Australia ace found himself half a second off the pace, trailing Paul Dumbrell, Chris Pither and Andrew Jones to finish the opening practice fourth quickest.

It's unusual territory for the V8 Supercars Dunlop Series' best qualifier and has brought to light the areas that will need to be addressed for Waters to take it to his rivals during the points-bearing mini-enduro.

"The only thing we can take away from practice this morning is that we didn't come away with a straight car," Waters told v8supercars.com.au.

"I wasn't happy with the car at all. It was a bit different to what I was expecting... we've got a few things to change overnight and make sure we have a good race car for Saturday.

"The team are fine, we just have to look at the data and re-evaluate it for tomorrow."

Waters' ENZED Falcon was put through its paces during the team's pre-Bathurst test, but the 21-year-old - who enters the penultimate round 173 points ahead of Dumbrell - declared there is still room for improvement.

"The test day we went to was really good, we tried everything we wanted to do," he said.

"We rolled it out here a bit different than usual, and it just didn't work."

Waters will only have one more practice session to iron out the kinks before he qualifies for the most high-pressure race on the Dunlop Series calendar tomorrow afternoon.

"I think I drove the car how I usually drive the car, so I'll just get in it tomorrow and do my thing," he said.

"And hopefully, we're the quickest."

A win this weekend will almost certainly put Waters out of reach of Dumbrell, who is currently second in the series standings.

When asked if his spectacular string of wins has added any pressure to perform well, there were no signs of nerves getting in the way of a good result.

"Everything is in my favour, I've won every round I've gone to," he said.

"This is Bathurst and you have to treat it with respect.

"I'm not worried at all. I think everyone should be worried about me seeing as I've been smashing it this year."

The Dunlop Series will return to Mount Panorama tomorrow for final practice at 10.45am, before qualifying at 3.00pm.