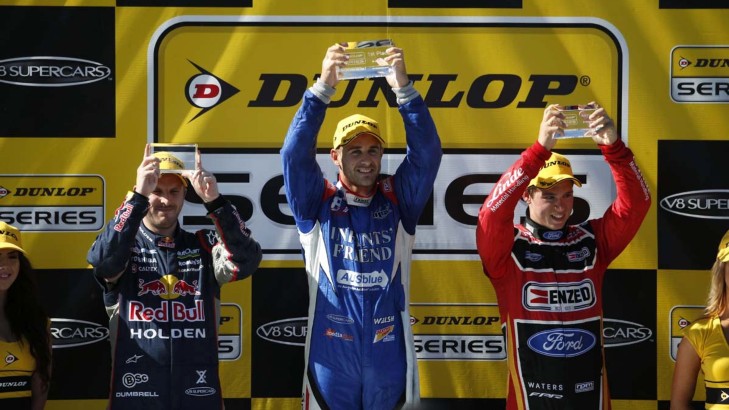 2013 Dunlop Series runner-up Ash Walsh is looking to overturn the series leader at this weekend's Perth 400, claiming he and third placed Cameron Waters are faster than Paul Dumbrell.

Former main game V8 Supercars favourite Dumbrell has a 22-point lead over Walsh after two rounds. He also holds one of the most coveted co-driver seats, pairing with Jamie Whincup in his Red Bull Racing Australia Commodore again in this year's Pirtek Enduro Cup, after winning the Supercheap Auto Bathurst 1000 in 2012, and finishing runners-up last year.

"Cameron's got a lot of speed at the moment. And although he leads the Championship, I don't think Dumbrell is as quick as Cam or I...

"There is up to 20 points between the top three on a weekend so a 22-point Championship lead at this point of the series is nothing."

With 150 points on offer for a win over two races this weekend, strong results could see the Matt Stone Motorsport/Infants Friend racer spring to the top of the table.

He claimed victory at last year's Perth event and believes this weekend is critical for him to pull away with the Championship lead before heading to his home event at Queensland Raceway in August, which he's pegged as a bit of a bogey track.

"We've traditionally gone well at Perth and have great speed on street circuits, so I'm confident we can gain the upper hand at Barbagallo and Townsville over the next two events," he said.

"I've struggled the last couple of years at QR despite it being my home track. It definitely places more emphasis on a strong result this weekend in order to give me a bit of breathing room at Queensland Raceway in two rounds' time."

While Walsh has climbed the ranks of the Dunlop Series for the last couple of years and is now a regular front-runner, he fell short for the title last year -won by Dale Wood, who now competes in the ADVAM/GB Gal Commodore in the main game.

"Last year was pretty tough for us and being the first year of the FG made it a bit harder," Walsh said.

"'I just need to focus on each race and make sure I get the best finish I can and the rest will look after itself."

The third round of the Dunlop Series kicks off today at the Perth 400 at Barbagallo Raceway. Tickets are available now.