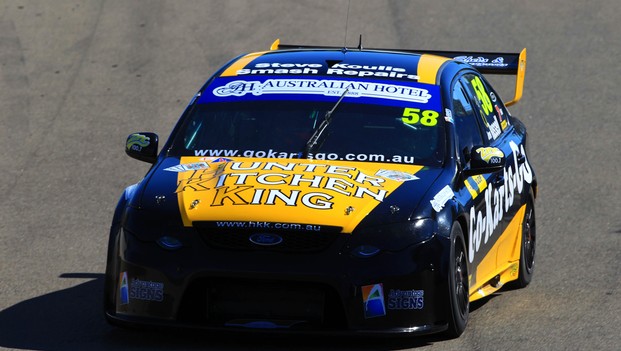 It's a tight timeline for the volunteer team to repair the front end and side damage to the #58 Novocastrian Motorsport Ford Falcon, ahead of the Coates Hire Ipswich 360 from July 26-28 at Queensland Raceway, the fourth round of the Dunlop V8 Supercars development series.

The privateer team seems to have found a panel shortage for FG Falcons – so rather than replace, the best option is to repair.

There are no penalties for not showing at a race meeting for Dunlop Series competitors, but the team is required to turn up to the event to set up on Thursday if entering. The team and can continue working on the car until Qualifying at 9.30am AEST on Saturday. A time must be set in Qualifying for the car to be considered an entry.

Novocastrian Motorsport awaits the return of its Ford Falcons today and will complete a full assessment of the extent of damage to the Go Karts Go #58, with questions already raised around the likelihood of the car being repaired and ready for Round Four of the Dunlop V8 Supercars at the Coates Hire Ipswich 360, less than three weeks away.

Having impressed in the opening race on the streets of Townsville with both entries comfortable inside the top 10, Novocastrian Motorsport returned to the circuit for the final day of the Sucrogen Townsville 400 meeting ready to get back on the track and keep the Go Karts Go and CEG Rentals Falcons at the heart of the battle.

For younger brother Aaren Russell it was a day of great achievement and a career best result, while for older brother and rival Drew, the weekend ended in heartbreak after a promising start.

“The weekend had been going really well up until Sunday, with good pace, the setup felt right and we were moving in the right direction," Drew said.

“Race One was a good race, but the input shaft failure in Race Two while running third was really disappointing. The guys got the quick turnaround completed and in Race Three our pace was really strong on the soft tyre and we had come from 13th to seventh  until I was turned into the concrete wall.

“We leave Townsville with a very bent car, not much time to fix it, and unsure if the budget will extend far enough to fix it, so it’s a very tough situation to be in, knowing that both cars had such great pace and we were finally up battling in the top positions where we knew we could, and should be.”

However, Aaren was clearly thrilled with the efforts of the team, the speed of his Ford and rightly proud of his driving.

“Overall, that was a very successful weekend for the CEG Rentals Falcon,” he said. “We had struggled in qualifying, but our race pace was incredible!

“It was such a breath of fresh air to race at the front and be competitive, and I knew we had what it takes, we just needed everything to come together.

“To have a personal best finish of fourth in Race One for such a small team was incredible, and if I believe rightly, a few guys shed tears, which just shows how much effort and emotion we put into the sport as a team, and how much it means to all of us.

“I was a little disappointed with Race Three, we got put in some tough situations and came off second best but to still finish fifth overall for the round was amazing, and I can’t thank all of the team enough for all that they do for us, so to have our best ever result for a Novocastrian car while having local partners was outstanding.”

The Dunlop Series appears at the next event on the V8 Supercars calendar, the Coates Hire Ipswich 360. Tickets are available through Ticketek.

Plenty of Pace, but no Luck for Douglas