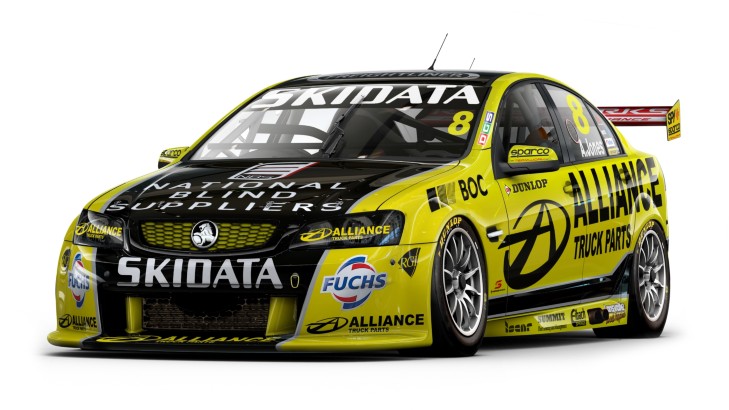 Andrew Jones will debut a bright and bold new livery at the final two rounds of the V8 Supercars Dunlop Series, with Alliance Truck Parts coming on board as naming-rights sponsor for the #8 Brad Jones Racing Commodore.

Part of the Freightliner family, Alliance Truck Parts supplies a wide range of new and remanufactured all-makes parts and accessories at sharp prices to keep trucks and trailers on the road.

The truck parts supplier company featured on Jones' car during his 2014 Bathurst assault, and will increase its exposure on its return to the Mountain this year with this new, eye-catching livery.

"We think Alliance Truck Parts customers will really get a kick out of seeing the #8 car in this fantastic livery," said Freightliner Australia Aftersales Manager, Greg Lovrich.

"We had a great experience through our involvement with Freightliner Racing in the V8 Supercars Championship, so we jumped at the chance to be involved with BJR and Andy in the Dunlop Series."

A former Dunlop Series Champion, Jones currently sits 8th in the series standings and is excited to take Alliance Truck Parts to the front of the field again in the Dunlop Seriesat the Supercheap AutoBathurst 1000.

"My relationship with Alliance Truck Parts started at the Bathurst Dunlop Series round twelve months ago where they had prominent branding on the bonnet," Jones said.

"A successful on track campaign achieved great brand awareness and customer engagement, which has resulted in continued support for this event and the Coates Hire Sydney 500 in 2015.

"Our design person at BJR (Brad Norman) has done a fantastic job with the livery and it connects well with the Alliance Truck Parts program that is run at selected NASCAR events on Brad Keselowski's car."

The Alliance Truck Parts VEII Commodore - which also has continued support from Skidata, National Blind Suppliers, BOC, Fuchs Lubricants and Raceworks - will make its race debut during the Dunlop Series mini-enduro at the Supercheap Auto Bathurst 1000.

But it will have its first on track session when the BJR squad goes to Winton for a test day next Wednesday before they hit the mountain.