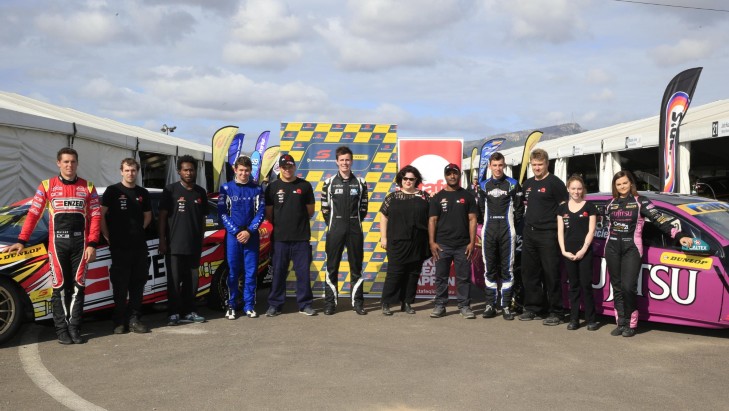 Six TAFE Queensland students have been given the ultimate work experience opportunity this weekend, being put on the tools with several V8 Supercars Dunlop Series teams at the Castrol EDGE Townsville 400.

The opportunity was made available through the partnership between V8 Supercars and TAFE Queensland, which sees the latter become the official education partner of the V8 Supercars Championship.

In addition to their involvement at the Castrol EDGE Townsville 400, the partnership also sees 48 students be integrated across many areas of the V8 Supercars business at the other marquee events in Queensland: the Coates Hire Ipswich SuperSprint and the Castrol Gold Coast 600.

TAFE Queensland North General Manager Joann Pyne said the partnership is a valuable opportunity for the students to gain real-world experience in the environment they aspire to work in.

"Not only do our students get to showcase the high-quality training that TAFE Queensland offers, but they get to take part in an exciting, high-octane event," Pyne said.

"This event will give them the opportunity to make important connections that could open doors for them, and will look great on a resume."

The partnership has proven successful in opening up doors for the students, with TAFE Student Nathan Toombs now a team member of Eggleston Motorsport after he was placed with the squad in Townsville last year.

"It's awesome, it's hard being chucked straight in the deep-end, that's what it feels like!" Hooker said.

"But the overall experience is great and I'm learning so much at the same time.

"This is definitely where I want to be in the future, so this is awesome."

As the current series leader, Team ENZED pilot Cameron Waters said Hooker's assistance across the weekend will be valuable to the squad's title campaign.

"It's awesome to have an extra pair of hands for the weekend," he said.

"Its often hard to get the personnel to come to all the rounds, so if we can get an extra set of hands to help out and do anything on the car, it makes the weekend run a lot smoother. "

The Dunlop Series return to the track today to qualify for race one at 10.20am.