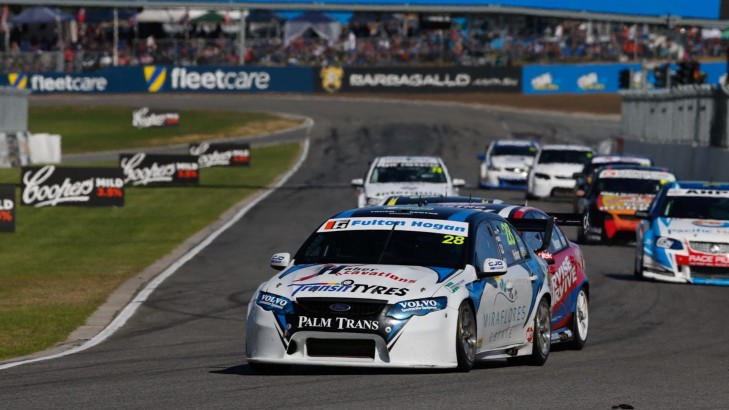 Dunlop Series Driver Morgan Haber, who races for Matthew White Motorsport, has withdrawn from the Sydney NRMA 500 due to shoulder surgery after driving with a heavily injured shoulder from a dislocation only days before Bathurst. Incredibly, despite the injury and associated pain, the North Queenslander battled through and finished an impressive eighth.

Haber first dislocated his shoulder during a fitness training session four days prior to the 2013 Sydney 500, but battled through the pain to complete his inaugural year in the Dunlop Series, ending in 24th place in the Championship.

This year, the regional Queensland driver continued to work on his fitness and increased his racing schedule by competing in the Sprint Series of the BNT SuperTourers in New Zealand for the M3 Racing Team.

Partnered with full time studies at QUT in Mechanical Engineering, Morgan's dedication to racing and strong work ethic saw the Mackay racing prodigy regularly in and around the top 10. Seven days prior to the Medic One Enduro at Bathurst, the first endurance race for the Dunlop Series drivers, Morgan again dislocated his shoulder highlighting the need for a permanent solution for the 21 year old. Opting to sacrifice the last round of 2014 so he is race ready and fit for a full campaign in 2015, Morgan went in for surgery in early November.

"It's tough to miss the final round in Sydney, especially as I'm sitting 13th in the Championship and I'm confident I could have improved on that in the last round," Haber said.

"The priority right now is to work hard in rehab so I'm fit and ready for a very competitive 2015 - I feel this will be my best opportunity to shine and get some great results."

Haber is recovering in his hometown of Mackay and will be out of the sling in two weeks and start rehab. Central and North Queensland supporters and sponsors have rallied around their hometown driver and are looking forward to following the youngster's career in 2015.

Check out the Dunlop Series at the final event this weekend, the Sydney NRMA 500.

Waters on top ahead of Enduro

11/10/2014
Stay In The Know
Sign up to the Virgin Australia Supercars Championship Newsletter
We use cookies to ensure that we give you the best experience on our website. If you continue to use this site we will assume that you are happy with it.Ok