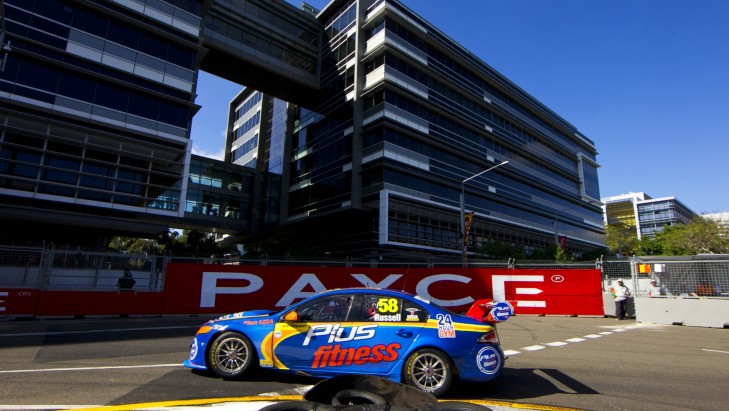 AarenRussell heads to this weekend's opening round of the 2015 V8 Supercars Dunlop Series in Adelaide keen to maintain his recent street circuit speed and start the new season in style.

The Novocastrian Motorsport driver finished 2014 with a podium in Sydney, having also grabbed a fourth at the preceding street circuit, Townsville in July. His best-ever result in the series, second in the finale propelled Russell to seventh in the standings after a frustrating first-half of the campaign.

Russell is confident his Plus Fitness Falcon will again feature at the pointy end during the Clipsal 500 weekend.

"We had the car working really well at Homebush, and know that we've put together a competitive package, so it's been frustrating to have to wait three months to go racing again!" Russell said.

"This weekend we get that opportunity. We know it's important to start 2015 the same way we finished last year, and build on what we were able to achieve in the second half of the season.

"With just seven rounds, we want to avoid another slow start and put our best foot forward from the outset."

Russell returns to the City of Churches looking to make amends for a tough start to the 2014 season. He was classified 13th after finishing 10th in Race 1 and 13th in Race 2, having dropped to 20th in the latter through an incident.

In 2013, though, the 3.2km circuit was a much happier hunting ground, with Russell securing a then career-best sixth for the weekend.

"I've always enjoyed the challenge of street circuits, and Adelaide is the best one we get to race on. The whole city gets behind the event to create an amazing atmosphere, which makes it a great way to start the new season," the 23-year-old said.

"Last year was my first weekend in this particular car and we weren't quite on top of some minor things and got caught up in a couple of little incidents. The Dunlop Series is so competitive that even being slightly off can cost you, so the results don't reflect the potential we had in the car.

"We've learned a lot since then and we're heading back to Adelaide looking for a much stronger start."

The new season kicks off with a pair of practice sessions and qualifying on Thursday, before the opening 19-lap race on Friday evening. The second race will be held at lunchtime on Saturday.