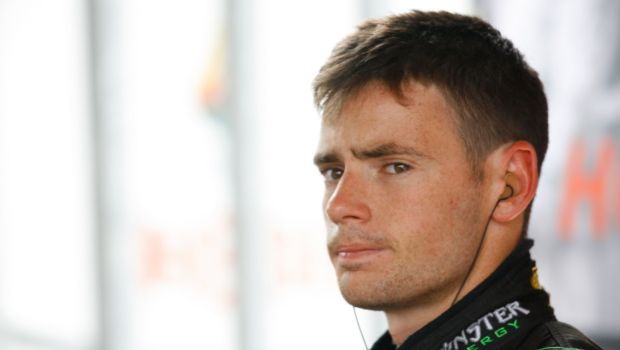 BigPond Sport caught up with him to discuss his motorsport background, his close relationship with Roland Dane, and how the death of his father and recovery from a road car accident has shaped his journey so far….

You won the Mike Kable Young Gun Award as rookie of the year at the V8 Supercars Gala Awards night – how does that honour sit with you?

Obviously it is a great honour for us in the Dunlop Series. To be able to get up at the Gala Awards and give a thank you to all my guys in front of everybody was great.

Winning that award was very nice and the cash bonus will help out, but for me the biggest thing was getting that opportunity to thank the team and sponsors and everyone for their help over the years.

You went into the final Dunlop Series event at the Sydney Telstra 500 fourth in the championship – but emerged second – did you see that coming?

Oh, that was a complete surprise – although because of how competitive it is, we knew it was a possibility.

We knew how many mistakes the guys had been making around me and I knew if I kept a cool head we could come out with a pretty good result. But to see Chaz and Nick make mistakes so early on was surprising for me – none-the-less it was great for us and allowed us to jump to second in the championship.

You need a bit of luck now and then. Second place and then a win in that last race was fantastic.

This has been your first year in the Dunlop Series – what is your motorsport background?

I started motocross when I was young and realised I wasn’t good at that and then started karting when I was seven with my dad who took me to a hire kart circuit where I first tried a kart and fell in love with it.

As the years went by I took it more seriously and my focus from a very young age was to get to Europe and get into Formula 1.

I had a big upset with those plans in 2003 when I had a road car accident. I couldn’t walk for six months and that put me out of racing for a long time.  That was a big turning point for me. I started to take my career more seriously and didn’t take anything for granted.

I knew if I wanted to make it to the top I needed to be a little more dedicated and that goal of making it in Europe was even more important to me, to prove what I could do.

Unfortunately due my financial situation in England I couldn’t continue over there, but throughout this time the Australian Motor Sport Foundation and Roland Dane were big supporters of mine. Roland offered for me to come back and run in the Dunlop Series. I was having a tough time in Europe, so it was an attractive offer.

How did competing in this series compare with other forms of motorsport?

I have one of the most successful teams in Australia, if not the world, looking after me. For me it’s a little bit surreal if anything.

I understand what it’s like for young drivers trying to find money to further their career – good things do come if you keep pushing. I’m an example of getting through the hard times and to be in this position – it’s great.

The competitiveness of the championship is something that every driver should be aspiring to. V8 Supercars has got to a point where it is one of the most competitive championships in the world. Now my focus is to get to this level.

Tell us about your relationship with Triple Eight Race Engineering owner Roland Dane?

I met Roland actually at a time when my dad was very ill with his lung cancer, and I made it quite clear to Roland that my focus was to go to Europe.

He has become somewhat of a mentor and I can turn to him if I need help. He’s been a fantastic supporter of mine. He picked me up when needed a lot of help.

Finishing so well this year has been even more important because the last time I raced in Australia was the year my dad died (2009). It was important for me to go away to Europe and do it on my own, but to come back here and have a good year with such good support around me – it’s been quite an emotional season.

Why is trying to secure a full-time V8 Supercar drive something that appeals to you?

I just think the level of competition is appealing. To win in V8 Supercars is not easy. If you do, it shows that you are one of the best – and guys like Jamie (Whincup) and Craig (Lowndes) are doing that now.

I look at them and they’re at the top of their game. If you put them in any category in the world they would be ultra-competitive. That is what I find most attractive about the V8 Supercars Championship.

For more on Scott Pye: www.scottpyeracing.com.au