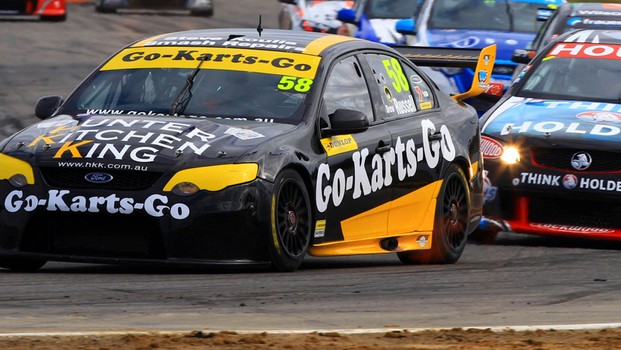 Both Novocastrian Motorsport drivers and brothers Drew and Aaren Russell are pleased to remain in the top 10 of the Dunlop Series Championship, despite what they felt to be a challenging weekend at Winton Raceway.

Drew's results were highlighted by finishing second in Race Two at the event in his Go Karts Go Ford, though he felt the team had more to learn, particularly with the Supercheap Auto Bathurst 1000 next on the calendar.

“Realistically, this has been our worst weekend of the year pace wise, we certainly weren’t strong,” he said.

“But we stayed out of trouble, moved forward in all of the races, and to take fifth for round, I’m pretty happy with that.”

“I think there are definitely a few things that can help us next time out, but interrupted Practice sessions hurt many of us and didn’t allow time to tune the car at all,” Drew said.

“But even so there’s a few things to work on within the garage, yet we can still be proud that we have more room to improve and are already capable of overall top five results.”

Qualifying didn’t go as well as they had hoped, with Drew starting 14th and Aaren a few rows back in 17th. There was plenty of action and while Drew made it forward, his brother went the opposite way.

Seventh in the first race meant a strong starting position for Race Two, which employs the reverse top 10 system. Drew held off a challenging Luke Youlden for a top two finish, and another top 10 result in the final three. While he started fifth, after four-wide through turn one he dropped back – though avoiding incident – and managed to hold that position to cross the line in seventh.

“We were tweaking the car all weekend, so it never hit the track with the same setup, but we didn’t want to make any big changes and totally destroy the ‘zone’ where we’ve got the car going well,” Drew said.

“We knew that we were strong in the areas we needed to be strong in, and where we felt a bit weaker, it wasn’t where others could find big advantages.

“It comes down to learning to consolidate rather than risk everything and end up a sore loser.

Aaren’s results weren’t as positive and he agreed the weather had affected progress. He wasn’t as lucky as Drew, getting involved in incidents and running off-track into the mud.

The CEG Rentals Ford Falcon was off the track at the beginning of Race One, leaving him to rejoin in 32nd and struggling with increasing engine temperatures after the front of the car was covered in mud. That left him to begin in 31st position for the second race, but charged to gain five places in the five opening laps, and eventually finished 23rd. 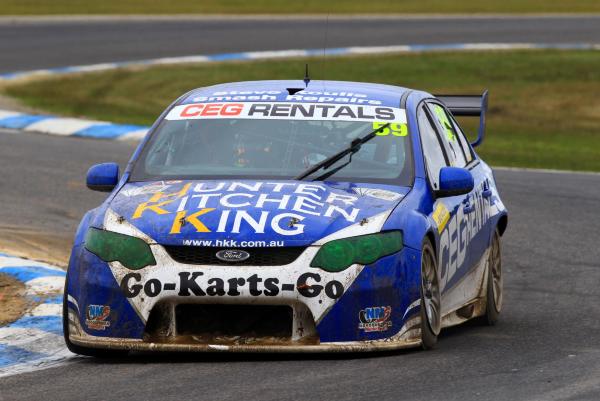 Front end changes to shocks and the roll centre were made for the final race, where Aaren once again started from 32nd.

He fought hard, gaining nine places in the final 12 laps of the weekend, to come home 23rd.

The Winton 360 was a true challenge for the young Russell, but his recovery efforts had been enough to hold on to ninth in the Championship standings.

“At the moment it definitely feels like a weekend to forget, a really big challenge,” he said.

“The weather hurt us first, the limited track time in practice – which made it a struggle with finding our pace and settling the setups – then all the drama of the opening race that put us behind from the onset.

“We didn’t manage to get on top of my car, and there’s a little issue that keeps rearing its head, so we’ve really got to keep working to try and fix it and see where we can go from there because this still feels like a strong year for the team.

“I got unlucky in Race One, getting caught in the trouble and not finishing, so that changed the game of the weekend and put us well behind, so it was a weekend of what it could have been. I feel sorry for my guys seeing they ended up cleaning the car three times from the intense mud from this place, and it really does disappoint you for them, but we’ll look forward to the next round at Bathurst.

“If you told me I was still ninth in the Championship when I saw that last chequered flag I probably would’ve laughed at you, but it’s good to still be in the top 10 and we’re never going to say never.

“We made a bad call, still moved forward, averaged nine places gained each race, and now just need to keep the pace and move further up the grid from the first opportunities in qualifying. We’ll keep learning and keep our chins up to do it all again soon.”

Click here for full Championship standings – Dale Wood leads Ash Walsh by 162 points. There are still 600 points on offer, with 150 awarded for a win over the final four races.

The next round of the Dunlop Series is part of the Supercheap Auto Bathurst 1000 (tickets are available now) and nine drivers – including both Russell brothers – are separated by less than 600 points.

Wood Drives Away From Chaos

Perkins Backs up Win With Pole