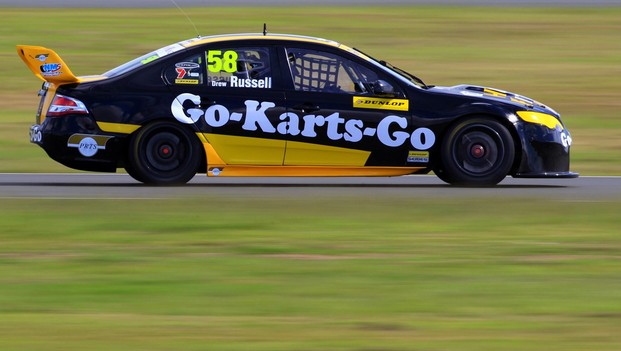 Drew Russell believes a top five finish is on the cards for his Go Karts Go Falcon, if he is able to qualify well at the Winton 360 this weekend.

The Dunlop Series Novocastrian Motorsport driver – who debuted at the circuit in 2007 – feels it is essential to start up the front.

V8 Supercars has implemented a new format for Dunlop Series qualifying at the Winton 360, with the field split into two halves to accommodate the large number of competitors running this weekend.

The sessions will run back to back on Saturday, with the lower 50 percent from combined practice running for the first 20 minutes, and the upper 50 percent five minutes later for 20 minutes.

“The main thing I want to improve on at Winton is definitely qualifying,” Russell said ahead of the event.

“If we can qualify further up the front and properly use the pace we’ve got this season, then we know we can stay in the fight at the front for the weekend of racing, and a top five could surely be on the cards.”

While the main series V8 Supercars qualify for each individual race at the Winton 360 this weekend, the Dunlop Series grid is determined by qualifying for race one, reverse top 10 for race two, and then combined points for the final contest. Each full race is 12 laps.

“We’ve noted a couple of things that we are going to try this round, and with Winton being a three race format, it is absolutely crucial to qualify well and achieve a good finish in race one – otherwise your whole weekend will be compromised,” Russell said.

“We’ve got a race package that should be in the battles that matter.”

Novocastrian Motorsport's teammate and younger brother Aaren Russell, who steers the CEG Rentals Falcon, has only raced twice at Winton, but is looking forward to the weekend’s racing.

“I take it one race at a time,” Aaren said of his approach to the three-race format.

“I want to be up the front in every race, but I also want to finish every race and it’s keeping that balance between challenge and consistency that is serving us well so far.

“Our team pride ourselves on our car preparation, and then the rest is up to us as drivers to bring the Falcons home in one piece, as far up the grid as we can.

“We have a new engineer on my car this weekend who will hopefully bring some more experience to the #59 garage, and help to find all of those one percent opportunities we haven’t quite yet mastered. Our first aim is to have qualifying speed and to use it well, then we need to be inside the 10 and push on to the top five.

“So to have a real chance it’s going to be vital to get qualifying right.”

While the team had a tight turnaround to repair damage to Drew's Falcon and make it on to the grid for last Dunlop Series appearance at the Coates Hire Ipswich 360, overall it has been a positive year for the duo, with each driver having achieved personal and team best results in the first half of the year.

Aaren currently sits sixth in the Championship, while Drew is 11th.

Dunlop Series Practice at the Winton 360 begins at 9.35am AEST on Friday. Tickets are still available, starting from $35.

Douglas: This is our Chance

We Have the Pace, the Rest Will Come, Eventually