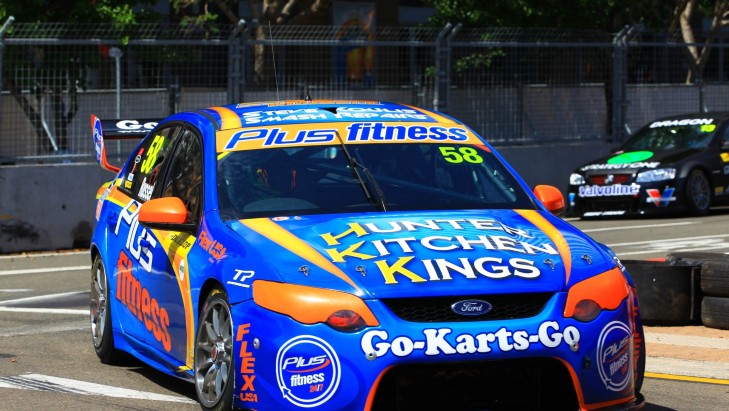 NovocastrianMotorsport's Aaren Russell finished the 2014 Dunlop V8 Supercar Series in style, recording his best result in the class with second at Homebush.

Russell took his Plus Fitness Falcon to third in Saturday's opening race and second on Sunday to be second for the weekend. The 22-year-old's previous best result was third, his maiden Dunlop Series podium at Queensland Raceway in August. With the performance, Russell secured a career-best seventh in the final standings.

Meanwhile, in a successful weekend for the family, older brother Drew Russell was second in all three races of the third-tier V8 Touring Car Series, driving for STR Racing.

Aaren Russell was among the Dunlop Series pace-setters from the outset, clocking the third-fastest time in the opening practice session. Despite missing the second due to windscreen damage inflicted by an errant bonnet, he qualified sixth for Saturday's race. Russell slotted into third early, a position he maintained to the flag, while managing a late engine problem.

Sunday was even better, with Russell qualifying fifth and finishing a comfortable second to claim the same position for the round.

"I couldn't have asked for a better weekend, it's a great way to end the season," he said.

"The Plus Fitness Falcon was amazing and we were able to show what we're capable of at the front of the field. We had a little bit of an engine problem on Saturday but we had enough to keep third place and then go one better on Sunday.

"Getting up on the podium again was special and a great reward for the entire team, especially my Dad. He was sick and couldn't make it to Queensland Raceway when I got my first podium, so I'm glad he was there for this one, because he's made all of this possible for Drew and I."

Russell's second Dunlop Series podium capped a strong second half of the season. Sitting 12th at the halfway mark, a race result of fourth in Townsville was followed by third for the round at Queensland Raceway, sixth at Bathurst and Homebush's second to move up to seventh in the standings.

"The first couple of rounds didn't go our way with some little problems, but we knew there was a lot of potential in the package," Russell said.

"Mid-year, we entered a new partnership with Paul Morris Motorsport which has really paid off; I can't thank Paul and his team enough for their help.

"Through that, we were able to unlock some more speed from the car and convert it into great results, including my first two podiums. It's been a fantastic second half of the year, it's a shame the season had to end! We'll go away, keep working hard and look to come out firing in 2015."

Aaren Russell  ›
2014 Sydney NRMA 500  ›
Stay In The Know
Sign up to the Virgin Australia Supercars Championship Newsletter
We use cookies to ensure that we give you the best experience on our website. If you continue to use this site we will assume that you are happy with it.Ok