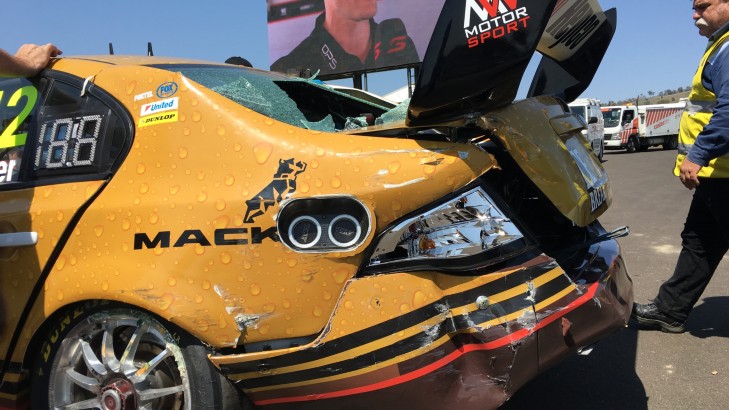 Ice Break Racing's Chris Pither has been ruled out for qualifying this afternoon after his shunt in practice this morning.

MW Motorsport team-owner Matt White confirmed to v8supercars.com.au the #42 entry will miss the chance to qualify for the V8 Supercars Dunlop Series mini-enduro,after his kiwi driver fell victim to The Dipper in the lastfew seconds of final practice.

Pither lost control on the entry to the awkward left-hander and collected the wall, leaving the Ford Falcon with substantial damage to the diff housing.

The 28-year-old was obviously disappointed - made worse by the potential the car had, which won't be reached in qualifying, having to sit on the sidelines.

"The Ice Break Falcon felt pretty good, we had our practice greens on and were trying to set a couple of laps," Pither explained.

"The car was starting to come on and it was getting better with each lap, but it seemed the track got a bit dirty across the top of the mountain and it just caught me out.

"I lost the rear on the way into The Dipper and slapped the wall on the right... I'm sorry to the team for the work I've given them but hopefully we can put it back together and have a decent run."

Pither was third quickest at the time of the shunt, but will start tomorrow's 41-lapper from the rear of the grid.

"It's a long race on Saturday with 250 kilometres," Pither reasoned.

"We had good pace, so if we can get the car back together, we should be able to come back through."

Stay tuned for qualifying coming up at 3.00pm.