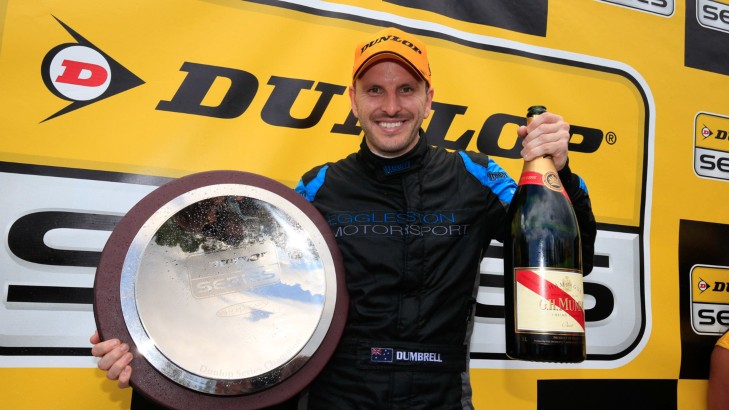 Paul Dumbrell has been crowned the 2014 Dunlop Series Champion while Cam Waters claimed victory in the Grand Finale Race at the Sydney NRMA 500.

However, Dumbrell's route to claim his secured-Championship trophy - his second Dunlop Series Championship since clinchinghis first in 2002 - was hampered after being sent into the tyre bundles by Andre Heimgartner at turn one on the first lap.

As the field tried to doge their way past a stricken Dumbrell, James Golding collected the Eggleston Motorsport Commodore after having no where else to go, deploying the first safety car.

On the restart, Ash Walsh made a dive on Taz Douglas in pursuit of holding on to his second place in the championship.

However, all hopes of being series-runner-up dissolved when the pass guided Douglas into the tyre bundles and left him in the line of upcoming traffic, with Pedersen being the first one round to smash into Douglas.

The pass cost Walsh a drive through penalty that saw him finish 11th and settling for third in the series.

Walsh sacrificed second in the series to Waters after an impressive drive saw him take the chequered flag bya 4.74secs margin to Aaren Russell, securing the round win.

Russell was second for the round, followed by the Brad Jones Racing-prepared Commodore of Andrew Jones.

The bad luck continued for Eggleston Motorsport when their third surviving entry steered by Garry Jacobson was dealt a pit lane penalty after failing to comply with re-start procedures, swerving after the Safety Car lights went out.

Paul Dumbrell  ›
2015 DVS Eggleston Motorsport ›
2015 DVS TEAM ENZED PRA ›
2014 Sydney NRMA 500  ›
Stay In The Know
Sign up to the Virgin Australia Supercars Championship Newsletter
We use cookies to ensure that we give you the best experience on our website. If you continue to use this site we will assume that you are happy with it.Ok