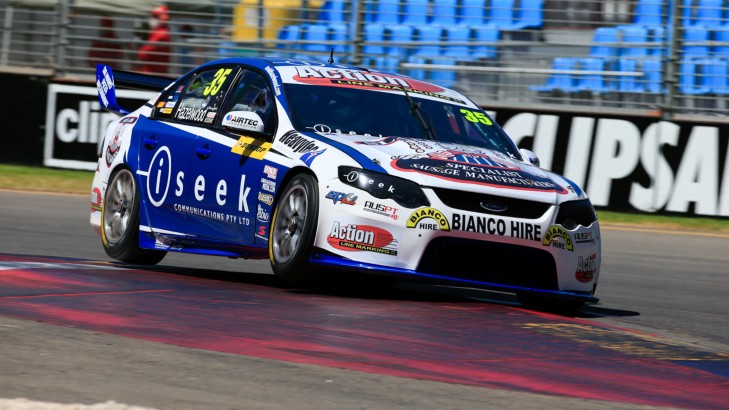 While two top 10 finishes at the Clipsal 500 was a good start for Todd Hazelwood, the local Adelaide driver felt he could get more out of his iseek Communications Falcon.

The V8 Supercars Dunlop Series driver sits ninth in the Championship, having recorded ninth and eighth in the two races at the treacherous street track over the weekend.

However the 19-year old felt there was still more to come, and will be working hard between now and the next round in Perth in May to further develop his performance.

"Very glad to walk away from round one with a good bunch of points, a straight car and gaining valuable knowledge to improve for round 2," Hazelwood said.

"With the way the schedule was spread out over the weekend, it was tough to get a gauge of what the track was doing and what changes to make to the car to suit.

"We really struggled with tyre life throughout both races, hurting our performance."

The South Australian started well but felt he dropped away in the closing stages of the 19-lap races.

"I had to be aggressive at the start and make up positions which worked well but I couldn't hold position in the dying stages of the race," Hazelwood continued.

"It was a shame we didn't receive a reward for the effort that was put into this weekend ... we all worked so hard to get the most out of everything but unfortunately this weekend a few small things let us down.

"Obviously I would love to be fighting for race wins but this weekend just wasn't our opportunity to do this, it was a huge week for everyone involved at the Clipsal 500 and the first round of the year being your home event is always very special."

Hazelwood managed to finish fourth on debut at Barbagallo Raceway in Perth last year, and wants to go that step further and earn his first Dunlop Series podium at the next round, running from May 1-3.