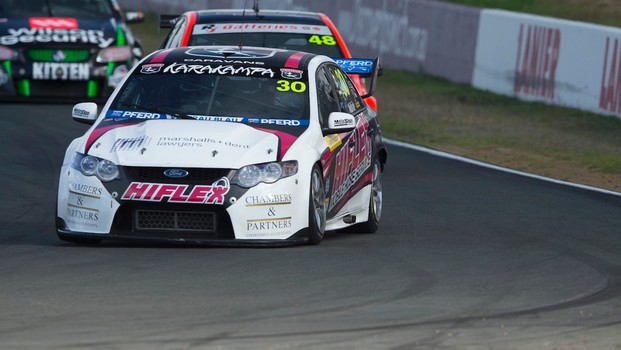 Tony D'Alberto Racing’s Nick McBride has every reason to be confident heading into the penultimate round of the Dunlop Series at the Supercheap Auto Bathurst 1000.

The 22-year old comes off his best Dunlop Series result since joining the series, having recorded eighth for the round and his first career top 10 finish at the last event, the Winton 360.

McBride’s prior racing experience has been in open wheel categories such as British Formula Ford, Formula 3 as well as the Formula Renault Winter Series, and admits the transition to tin-top racing has been a steep learning curve – but experience is changing that.

“I found it really hard at first because it was a massive change to what I’ve been used to,” said McBride.

“V8 Supercars move around a lot and although they have a lot of horsepower, there’s not as much grip as the open wheelers I’ve raced.

“The beginning of the year was particularly tough because I literally only had a few hours behind the wheel leading up to Clipsal and it was the first time I’d raced at Adelaide.”

A busy development schedule for Tony D’Alberto’s main series campaign left little time to test the #30 Hiflex Dunlop Series car between the first three rounds at Clipsal, the Chill Perth 360 and Sucrogen 400 at Townsville. But a break between the third and fourth events allowed a time for the team to head to Winton for a test day.

McBride said testing before the last two rounds at Queensland Raceway and Winton Raceway gave him a chance to really get comfortable in the FPR-built Ford Falcon FG, previously run in the main series by D’Alberto.

“We had a lot of DNFs in the beginning of the year so it was hard to learn but since I’ve had more laps in the car I’m starting to get my head around such the unique driving style needed.”

The results spoke for themselves with McBride recording his best ever qualifying result of eighth at both QR and Winton and his best race result of sixth in the opening Winton race.

“It’s a track you have to respect because it can bite you.”

Heading into this weekend’s event, McBride is hoping to continue his progress while being realistic about the challenge at hand and hopes he can spark interest for an endurance drive in 2014.

“I just want to complete every lap and get as much as experience as I can,” he said.

“I’m lucky to have two experienced drivers in Tony D’Alberto and Jonny Reid to bounce ideas off and learn from.

“I think it will be harder to qualifying in the top 10 at Bathurst but I’ve been making a big step forward each round.

“I just want to keep progressing up the field and then give the Dunlop Series a serious crack next year.”

McBride is currently 16th in the Championship and is the third highest rookie behind 13th placed Kristian Lindbom and Gary Jacobson in15th.

The Dunlop Series is on track from Thursday morning, with Practice One at 8.50am AEDST.

Tickets are still available for the Supercheap Auto Bathurst 1000.

Day Steps Up Into Dunlop Series

27/08/2013
Related Content
15' Team CoolDrive ›
Stay In The Know
Sign up to the Virgin Australia Supercars Championship Newsletter
We use cookies to ensure that we give you the best experience on our website. If you continue to use this site we will assume that you are happy with it.Ok