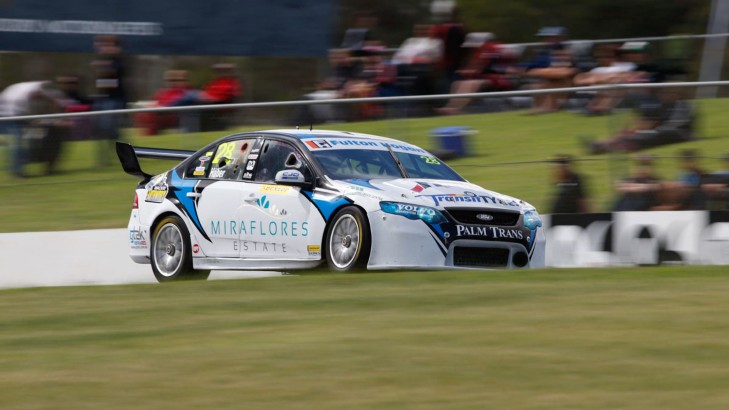 Just 81 points separates first and third in the Dunlop Series - but if the last round at Winton is anything to go by, there are a number of emerging contenders in the field.

All eyes will be on Paul Dumbrell, Ash Walsh and Cameron Waters at the top of the table at Barbagallo Raceway this weekend -particularly with Walsh quickest overall, and Dumbrell topping the timesheets in the first session yesterday.

But there are others in the field continuing to develop their driving skills and aiming to finish at the pointy end in Perth.

Queenslander Morgan Haber made a dominant stand with a career best qualifying result of third at last event Winton - showing the 20-year old has plenty of pace in just his second year in the series. Yesterday he was eighth in the second practice session.

According to Haber, he's finally converting the car's potential into strong pace during qualifying and is confident he will be inside the top 10 this weekend.

"I struggled in qualifying last year and at Winton I pulled my finger out and ended up with third," Haber said.

"The races didn't go well for me at Winton but the car was certainly quick and hopefully it will be the same this weekend at Barbagallo.

"I went okay here last year considering it was my first time at the track and this time around I have confidence on my side."

A poor start in the opening race and becoming tangled in an accident on the first restart in the second race put a dampener on Haber's progress but the MW Motorsport driver says there were plenty of positives to come from Winton.

"I got a rubbish start which set me back and it was pretty tough to pass but we sorted a few issues out with the car at Winton and I think we will have a nice fast car to be in the top 10 at Perth," added Haber.

Eggleston Motorsport's Garry Jacobson also sent a clear message that the more experienced drivers do not intimidate him. He finished third in the second practice session yesterday, behind the two points leaders.

The Shepperton based driver was entrenched in an enthralling three-way battle in the second race at Winton with Waters and Paul Morris - showing no signs of weakness throughout the race.After a tussle lasting several laps, Jacobson was able to capitalise on contact between Morris and Waters who both went off line and opened the door for Jacobson to claim his career best result of third.

Jacobson secured sixth for the round and sits sixth in the Series standings coming into this weekend - just four points behind Morris.

This weekend also sees Dean Fiore back behind the wheel, with the Nissan Pirtek Enduro Cup co-driver to compete with MW Motorsport.

Qualifying begins at 11am local time for the Dunlop Series, with the 38-lap race at 1.25pm.