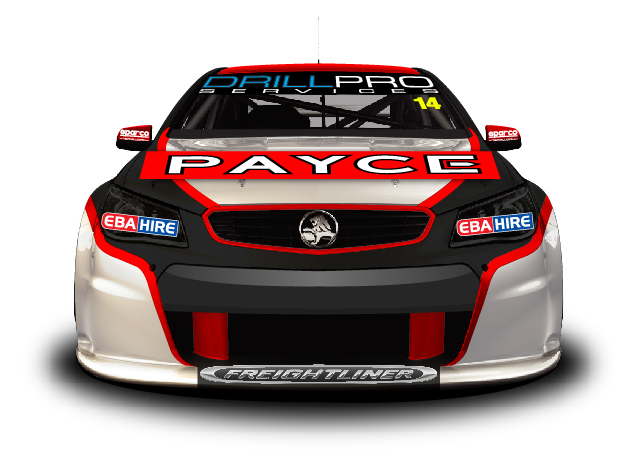 Brad Jones Racing’s Macauley Jones will campaign the V8 Supercars Dunlop Series with the support of PAYCE and DrillPro again in 2016.

The #14 Holden Commodore is the last car to be revealed from the BJR stable, with teammates Josh Kean and Andrew Jones taking the covers off their new-gen cars earlier this month.

Jones’ 2016 livery is a revived take on his car from last season, with long-time sponsors PAYCE and DrillPro returning as major sponsors for the 21-year-old in a refreshing red, white and black scheme on the new-gen Commodore.

“It’s really great to have the Brian and the team at PAYCE, John and Donna from DrillPro supporting me again for the 2016 season,” Jones said.

“I really want to step up my game this year and I believe the next gen car will help me to achieve my goals.”

2015 saw Jones enter his first full-time campaign of the Dunlop Series, which saw him end the season 50 points adrift of breaking into the top ten.

In 2016, Jones and his crew have readjusted their goals to solidify the rising star’s place in the series, aiming for their first podium finish as they upgrade to the new-gen chassis this season.

BJR’s Dunlop Series program have all upgraded to the VF Commodore this season, which has been a time-consuming task for the team, with Jones working alongside his crew over the past month preparing his own race car.

“It’s been a lot of work preparing my car for the season ahead,” said Jones.

"Two of the other Dunlop Series mechanics in our group have had some experience working on these cars before, which is great for the team and provides a great learning opportunity for me.

“I’ve been asking a lot of questions and the guys are always happy to help.

“The team as a whole have a lot of experience with these cars. I’m really excited to see what we can do this year and I am keen to get on the podium and get some great results for PAYCE, DrillPro, EBA Hire and the BJR team.”

Jones will debut his revived livery at the team’s first official test day on Monday, before the season-opener at the Clipsal 500 Adelaide, March 3 – 6.