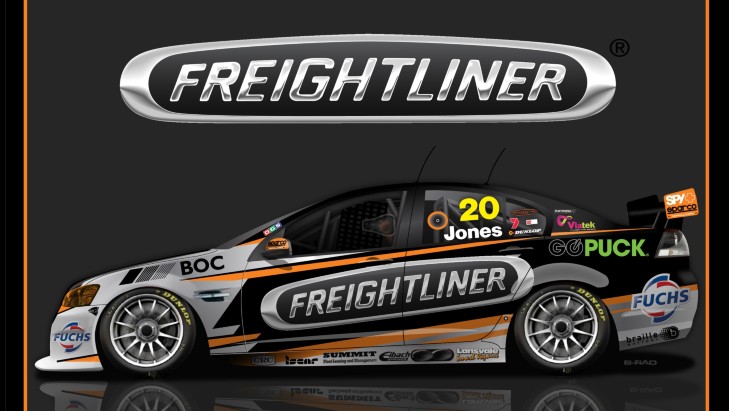 Andrew Jones will compete in the 'Team Freightliner' #20 VEII Commodore for Round Threeof the Dunlop Series at Perth's Barbagallo Raceway from May 16-18.

The team will sport a new livery that highlights Freightliner's 25th anniversary in Australia.

Team principal Kim Jones is pleased to welcome Freightliner to the Dunlop Series team - an extension of a new truck supply partnership in 2014.

"It's great to have such an iconic international company support our Dunlop Series team, as part of their 25th anniversary in Australia," Jones said.

"Freightliner's partnership with Brad Jones Racing is new to 2014 but already we have received strong engagement from our dealer network and customers," he said.

"Our partnership will be highly visible at the Perth round where Team Freightliner will be appearing in the Dunlop Series."

Jones currently sits fourth in the Dunlop Series standings, with416 points, and is keen to continue his challenge for the 2014title.

"I feel very privileged to have Freightliner as part of our program, we've already had some solid results which puts us in a strong championship position and hopefully in Perth we'll get on the podium," he said.

Round three of the Dunlop series championship starts on FridayMay 16 with two practice sessions followed by qualifying and race one on Saturday and race two on Sunday.

The Dunlop Series is just one of many great support categories at the V8 Supercars event.

Owen to start from pole