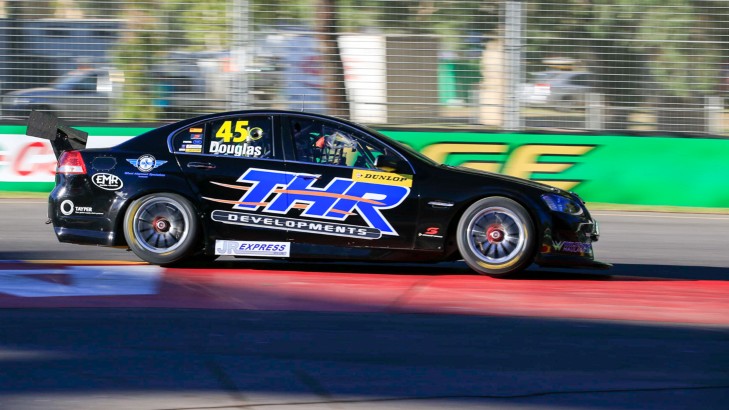 The 31-year-old is one of Australia's mostsuccessful racing exports, having competed in the LMP2 category of the World Endurance Championship, as well as British F3 and Formula Renault 3.5.

After his success in Europe, the Blackburn-native has returned home to carve out a career in Australia, with his sights firmly set on V8 Supercars.

Martin told v8supercars.com.au he was in talks with a number of teams last year about a potential enduro drive, but those conversations were stalled by his lack of mileage at the circuits on the V8 Supercars calendar - particularly Mount Panorama.

To familiarise himself with the tracks, Martin joined the Australian Porsche Carrera Cup grid in 2015, but will adapt his internationally honed skills to the #45 Dunlop Series Commodore tomorrow at Mallala to rack up his V8 Supercar miles.

"It's really for me to try get some experience in the cars," he told v8supercars.com.au.

"It's not a new generation car, but at the end of the day it's still a V8 Supercar, so any chance to do some laps in one is a bit of a bonus.

"I have driven one but it was a long time ago - back when I was doing Formula Ford [in Australia] in 2005 I got almost 20 laps at Winton in a Tasman Motorsport car alongside Jason Richards.

"V8 Supercars is the aim at the moment... it's a top line category with very professional teams and drivers and if you can do well in it, you're beating some of the best in the world."

The VEII Holden that Martin will steer tomorrow was campaigned by Taz Douglas at the first four rounds of the 2015 Dunlop Series.

With Douglas having withdrawn from the category at the close of Townsville to focus on his PIRTEK Enduro Cup duties, the seat in the #45 THR Developments Commodore is currently vacant.

THR Developments' team owner Nicholas Taddeo told v8supercars.com.au Martin could possibly fill the vacancy for the rest of the season pending the results from tomorrow's test.

While Martin hasn't ruled out an appearance in the series at the final two rounds - which would see him juggle his Carrera Cup duties with the Dunlop Series mini-enduro at Bathurst - the accomplished racer said a stint in the series next year is on the cards.

"There is the potential to do both, but at this stage it's highly unlikely," Martin said of his possible double-duties at the 2015 Supercheap Auto Bathurst 1000.

"Nothing's been signed or talked about yet. We'll just do the test and go from there."

The seat in THR Developments' second car is also currently vacant, having been steered by Chelsea Angelo and Jason Leoncini on a round by round basis earlier this season.

The 2015 Dunlop Series resumes at the penultimate round of the series: the Supercheap Auto Bathurst 1000, October 8 - 11. Click here for ticketing options.