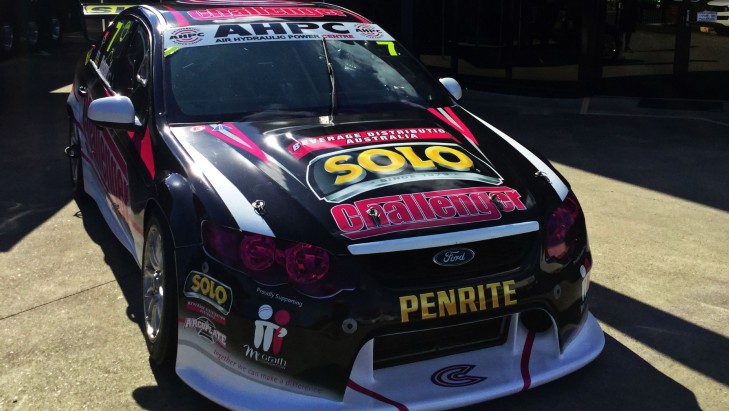 RSport Race Engineering's Brett Hobson will cross over to the blue oval for the remainder of the season, debuting his new Ford this weekend at the Coates Hire Ipswich SuperSprint.

The 29-year-old began his 2015 V8 Supercars Dunlop Series campaign in a Holden, but after sustaining heavy chassis damage in an epic crash at the Clipsal 500, Hobson was forced to offload the Commodore post-Winton.

After the ex-Garry Rogers Motorsport Commodore sold, Hobson remained in Holden colours for Townsville, making a one-off appearance in an ex-Kelly Commodore.

But the Coates Hire Ipswich SuperSprint will see the Challenger pilot switch to the blue oval after inking a deal with Jim Pollicina to loan his Ford for the remainder of 2015.

"We were trying to put together [this deal] before Townsville, but due to time constraints, we just couldn't get it together," Hobson told v8supercars.com.au.

"That was the reason we stepped into the Kelly Racing chassis for Townsville.

"We are really looking forward to trying to finish the season off with some good results, and with Jim giving us this opportunity, I think we do have a good chance."

Following his epic crash at the Clipsal 500 that set in motion his manufacturer change, Hobson has endured a difficult season, with a best round result of 22nd at Townsville.

But with a new car for the remaining three rounds, Hobson hopes his year will only get better, but expects a challenge this weekend as he adapts to his newFord.

"We have had no time to do a test day, so again this weekend will be a big learning curve for me trying to learn the car," he said.

"But it's something I'm really looking forward to.

"It would be great to try and hand some results back to our sponsors after the year we have had."

Hobson will make his Ford debut today at the Coates Hire Ipswich SuperSprint during practice one at 9.15pm, followed by another 40-minute practice session at 2.20pm.