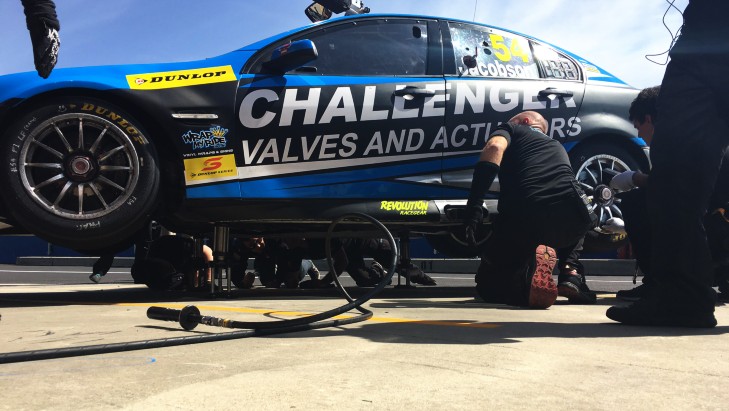 Eggleston Motorsport's Garry Jacobson expects to be inside the top three come qualifying this afternoon despite suffering gearbox dramas yesterday.

The Shepparton-native was running inside the top ten during the mid-stages of yesterday's first practice when smoke began to barrel from the rear of Car 54.

Jacobson continued to push on, but was forced to abort his quick lap and come into the pits for his EMS crew to diagnose the smoke source: a loose gearbox fitting that was spilling fluid.

Despite the issue, the pilot of the Challenger Commodore still salvaged seventh fastest and is inhigh spirits for his form for the rest of the weekend.

"[Yesterday] didn't go to plan, but it doesn't necessarily mean that the weekend is out the window," Jacobson told v8supercars.com.au.

"I felt that something wasn't quite right with the car, but I was still able to achieve the speed.

"I've got a lot of faith in the car that it will be able to do the job [today], and in terms of me, I know what times I can do around here and they're not out of reach. They'll be competitive enough to be in the top three or four, so I'll be okay."

The Dunlop Series mini-enduro is the most high-pressure race on the calendar, with 300 points on offer for the single, 250 kilometre haul around Mount Panorama.

With only 18 points separating Jacobson from the top five in the series standings, the 23-year-old is hungry to capitalise on the points-bearing, penultimate round and move up the order before the finale at the Coates Hire Sydney 500.

"I've put a lot more preparation into Bathurst compared to the other rounds," he said.

"I travelled up to the Gold Coast to see Phil Young [the Holden Racing Team's official physio] to do a bit of extra training to prepare myself for this longer stint that we don't normally do.

"We've also been working on the little things we can do to maximise in terms of getting the best out of our pit stops and the car handling, and the best out of myself and how I'm driving, because you can always improve at a track like Bathurst.

"Everything is ticking along quite nicely."

Jacobson and the Eggleston Motorsport crew will have one last chance to rid Car 54 of its gearbox issues during final practice one at 10.45am.

Then, they will set the grid for the mini-enduro during a 40-minute qualifying session this afternoon at 3.00pm.