Todd Hazelwood has won the 2017 Dunlop Super2 Series with a penalty-aided victory in the final race of the season in Newcastle.

Hazelwood started the weekend trailing Paul Dumbrell by 49 points, but took top spot and an 11-point advantage with victory in the opening race on Saturday.

Dumbrell’s difficult weekend continued this morning when he managed just 21st on the grid following a driveline failure in qualifying.

From pole, Hazelwood was slow away from the line with wheelspin.

That let rookie Will Brown take the lead into Turn 1, where Shae Davies drove around the outside of Hazelwood to take second place.

A clearly cautious Hazelwood then let Jack Le Brocq through to third on the second lap, and fell back towards the group of Macauley Jones, Bryce Fullwood and Richard Muscat.

The Bigmate Racing driver picked his pace back up to establish a comfortable margin and started the final lap in third place, which would have been more than enough to win the title with Dumbrell down the order.

That became first, though, after MW Motorsport team-mates Davies and Le Brocq clashed at Turn 2 while fighting for the lead.

Le Brocq looked to have made a strong move around the outside, but Davies tagged and spun the Nissan on corner exit, the GoGetta Altima making heavy contact with the wall.

Davies crossed the line first, but was quickly handed a 25-second time penalty that dropped him to 11th and gave Hazelwood a sixth victory of the season and the round win.

The title is also Matt Stone Racing’s first, with the group and Hazelwood expected to graduate to Supercars in 2018.

“I can’t believe it. That’s the hardest race I’ve done in my whole career,” he said.

“I’ve never had cramps like that in my guts in a long time, I don’t know where that came from.

“I’m just over the moon. I can’t thank everyone enough, I’ve got an amazing team behind me.” 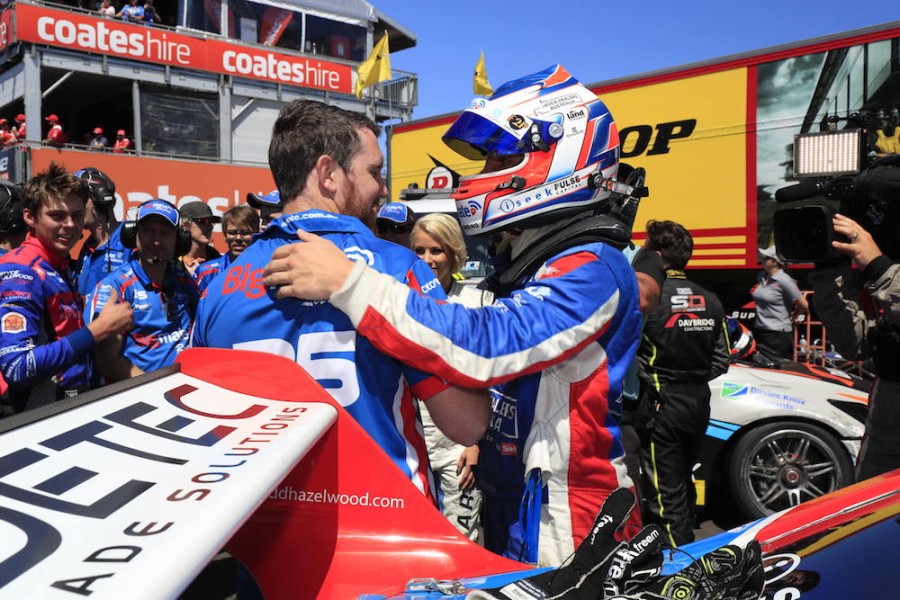 Dumbrell picked up two places on the opening lap, only to lose them trying to pass Matt Chahda at Turn 11.

From there, the Eggleston Motorsport driver got up to 12th, but went off again at Turn 11 with five laps to go and finished 13th.

That meant Hazelwood’s final margin at the top of the championship was 95 points.

Jones and Fullwood inherited second and third, Fullwood taking second for the weekend ahead of team-mate Davies.

MW Motorsport pair Davies and Le Brocq were only fighting for the lead after Brown’s demise while on track for a maiden victory.

Brown edged away at the front, his gap over Davies growing in the second half as Le Brocq closed in.

His lead was nearly 1.5 seconds before the Eggleston Motorsport Commodore stopped on the back straight with four laps to go due to a vibration suspected to have been caused by a gearbox problem.

“It’s the highs and lows of motorsport,” said Brown.

“I felt [the vibration] with about 10 laps in and I was asking how many laps left but it went.

“It was bad luck, but we’ll do a bit of testing over the off-season and come back next year.”

Garry Jacobson’s reign as defending champion finished with a 17th place, the Prodrive man turned around at Turn 11 on the second lap by Jack Perkins.

After serving a drive-through Perkins was 18th, while the incident delayed Josh Kean who later retired due to an engine failure