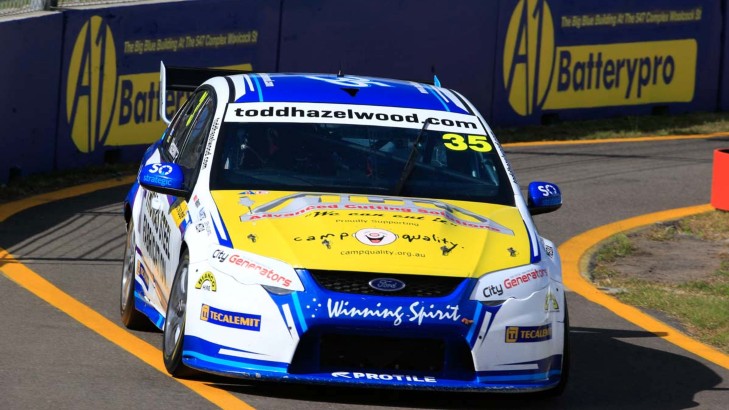 Todd Hazelwood insists he feels more prepared than ever heading into next weekend's Sydney NRMA 500, after his disappointing debut in the Dunlop Series last year at Sydney Olympic Park.

The 19-year-old secured a spot on the 2013 Dunlop Series Grand Finale grid with Minda Motorsport after winning the 'Shannon's Supercar Showdown' reality show.

However, his maiden assault of V8 Supercar racing was short lived after an accident with Steve Owen in qualifying saw him retire his damaged Commodore from the weekend.

Now, the Adelaide native heads to the Sydney NRMA 500 confident in a V8 Supercar after his impressive first full season in the Dunlop Series sees him enter the Grand Finale inside the championship top 10.

"It's been a long 12 months since being stuck in the wall at Sydney," he told v8supercars.com.au.

"There's a lot of aspects that I've just grown more confident in over the last 12 months. When I went to Homebush last year, I'd done about 20 laps in the car that I was actually racing in on the weekend.

"So to go in it this year and know more about the competitors that I'm racing against and learning about the car because if you don't quite understand the car underneath you, it's hard to actually get the most out of yourself... I'm feeling a lot more prepared this time."

A career best finish of fifth in the first ever Bathurst mini-enduro was a standout performance for Hazelwood, in addition to his impressive rookie season that exceeded his original expectations.

But with 300 points on offer across the weekend, the young gun said he's looking to capitalise on his current series standing to try and grasp the top six before the end of the season.

"At the start of the year, I thought that if I could be inside the top 15 by this point, we'd be rapt," he said.

"But with the car we have, the team that I'm surrounded by and the support network I have; there's no reason we shouldn't be in the top ten and hopefully by the end of Homebush, we can move forward again.

"You always keep moving your expectations up and you always want to try and get the most out of yourself, but at the same time you want to be realistic... the points are quite tight, but I think we can at least make our way to sixth position in the championship if we're going well, but we'll wait and see."

Hazelwood will take to the streets of Sydney in a Tecalemit Australia-backed Falcon off the back of his announcement that the hoists and lubrication company will continue their support as naming-rights sponsor for his Matt Stone Racing-prepared Falcon into next season - a well-appreciated boost to Hazelwood's Dunlop Series campaign. [Link to story]

See how Hazelwood fairs in his return to Sydney Olympic Park at this weekend's Sydney NRMA 500.

Todd Hazelwood  ›
2014 Sydney NRMA 500  ›
Stay In The Know
Sign up to the Virgin Australia Supercars Championship Newsletter
We use cookies to ensure that we give you the best experience on our website. If you continue to use this site we will assume that you are happy with it.Ok