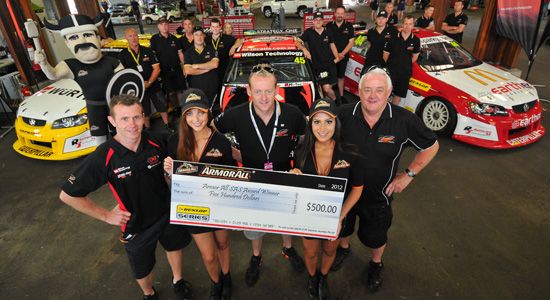 GREG Murphy Racing has won the $500 ARMOR ALL SAS Award from the seventh and final round of the 2012 Dunlop Series at Sydney Olympic Park.

The prize, which was given at all rounds of the series in 2012, is offered for ‘style, attitude and safety’.

Award criteria includes having a well presented car, team and garage, meeting deadlines pre and during an event, a positive racing attitude and meeting safety standards on track, in pit lane and in the paddock.

Team drivers Dale Wood and Geoff Emery joined Team Principal Kevin Murphy in collecting the ARMOR ALL cheque on behalf of the team, which was competing under the Greg Murphy Racing name for the final time last weekend.

Television coverage of the Sydney round will air on 7mate on Saturday December 15 with a replay on SPEED on Foxtel at a later date.

Stay In The Know
Sign up to the Virgin Australia Supercars Championship Newsletter
This website uses cookies to improve your user experience. By continuing, you will be providing your consent to our use of cookies.Ok