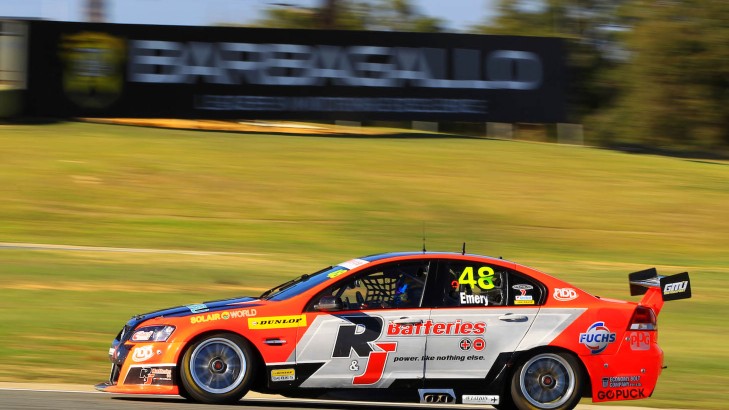 GMJ Motorsport focused on its next challenge, the Castrol Townsville 500, after what it considers stellar results at the recent Perth round of the Dunlop Series.

West Australian Matt Hansen recorded his best Dunlop Series race result, Jim Pollicina made gains over the weekend and Geoff Emery managed to recover after disappointment with hisqualifying effort - so all three reflected positively on Perth and can't wait to hit the streets of Northern Queensland.

"Townsville is one of my favourite tracks - I love it," R & J Batteries Commodore driver Emery said of the upcoming Dunlop Series event.

"It's good fun and exciting. There are plenty of walls everywhere, so you can't mess up or you end up in the fence. That's what makes it so exciting - it keeps you on your toes."

Pollicina and engineer Dave Slater worked on driver development at Barbagallo Raceway, and the MoComm Falcon driver is confident the improvements in the West will translate into better results moving forward.

"Townsville is a very different track, so car setup is going to be critical and braking will be a key," Pollicina said.

"I think we chipped away at some of my driving techniques this weekend - particularly on braking."

Pollicina moved up the field over the weekend, while Emery and Hansen felt they were on the back foot after being caught out by the notoriously abrasive circuit, chasing front-end grip during practice.

"We weren't as fast as we'd have like in qualifying. There was more in myself and in the car," said Hansen after setting the 19th quickest time.

Emery's starting position of 16th left him frustrated in the opening race as he got caught in the middle of the pack with little in the way of passing opportunity and was unable to unleash the full potential of his R & J Batteries Commodore.

"We went in the wrong direction with our setup for qualifying and that pretty much sets up your weekend around here," Emery said.

"It's difficult to pass from there onwards. We had the race pace of the top seven or eight cars but you can't utilise that when you start that far back. We just made an error of judgment."

Emery overtook teammate Hansen over the course of the 42 laps, the two Commodores running together mid-race.

"We got a good start and I just tried to run with the guys in front. I followed Geoff and Morgan Haber and we had similar pace until Haber went off in front of me," explained Hansen.

Heading into Race 2, Pollicina was confident with green tyres at his disposal. The Sydneysider was able to make a rapid getaway in his MoComm ex-FPR FG Falcon. According to Pollicina, he is now on top of the subtle differences of the newer car.

"I used to get great starts in another category and I haven't been able to mimic them in this car so it was good to get back to where I was," Pollicina said.

Pollicina also fell victim to a braking error, which undid his brilliant opening.

"I had a set of good tyres, I made up a few positions and was looking forward to a good race but I made a mistake in the mid part of the race which put me in a poor position for the remainder," he explained.

Emery moved up 14th while Hansen became involved in an intense fight with Garry Jacobson for 16th position. Hansen showed incredible composure over the course of Jacobson's attack, which lasted nearly half the race.

The setup provided by the GMJ Motorsport crew gave his Forpark Australia/Australian Custom Moulders Commodore better drive off turns, which allowed him to hold out Jacobson until the end.

"It's good racing when it's close and it keeps you on you toes - especially when it's over 15 laps," said Hansen.

"It was hard work. He had good braking and turn-in, but we had better exits so I able to hold him off by getting better power down."

The Dunlop Series returns to the track at the Castrol Townsville 500, running from July 4-6. Secure your tickets now.

08/05/2014
Related Content
Walsh takes points lead  ›
18/05/2014
Geoff Emery  ›
Matt Hansen  ›
2014 Castrol Townsville 500 – Driven by TAFE Queensland  ›
Stay In The Know
Sign up to the Repco Supercars Championship Newsletter
We use cookies to ensure that we give you the best experience on our website. If you continue to use this site we will assume that you are happy with it.Ok