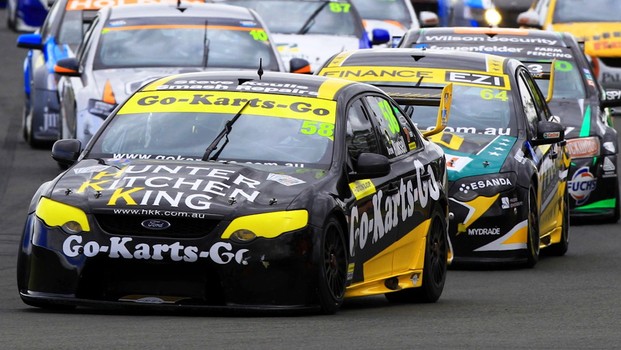 Having again proven their drive to succeed, the Newcastle team’s ‘never give in or up’ attitude ringing true, Novocastrian Motorsport made it to Queensland Raceway’s Round Four with two Ford Falcon V8 Supercars ready to take on the pack.

Completing a rebuild of Drew Russell’s #58 Go Karts Go Falcon just days before the event commenced, the team should have been tired – they could have been off their game – but that’s not the way of this family operated volunteer team. So as the two Falcons rolled out for practice, the air was filled with enthusiasm and determination to make the long hours and ongoing investments all worth their while, along with an added drive to achieve for all of the supporters who had come on board to ensure both Drew and Aaren would line up on the Queensland grid.

Struggling with both entries in qualifying, the team had made some adjustments that led setups the wrong way, along with a busy session meaning clean laps were tough to come by on the short circuit. Placing 18th for Drew and 21st for Aaren, the realisation this one would again be tough to recover was apparent, but taking to the tarmac for the opening race, the Go Karts Go and CEG Rentals FG pilots were ready to make the most of it.

It may have been an incredible challenge to get the #58 Falcon on the grid, but with an invaluable and dedicated supporter group, and unquestionable commitment from their crew, both Novocastrian Motorsport Falcons had rolled out at Queensland to again perform with the best, the young Newcastle duo showcasing impressive and clean race craft in a weekend of madness to bring home the pair of Falcons with minimal battle scars, placing sixth and seventh outright for the weekend.

A result the team could not have dreamed of given the uncertainty that had plagued the weeks following their last outing, it would end with the story of the moment becoming rebuild to race podiums, another team best with Drew scoring second in Race Two over the weekend.

Aaren is sixth and Drew 11th in the Championship with three rounds to come.

“The car was quite good all weekend given what we had to come through to be here,” Drew said. “Qualifying hurt us, but with ninth in race one, my best and a team best result with second in race two, and getting caught up in everyone’s incidents in race three, it’s been a solid weekend so to bring it home in sixth for the round from where we came from less than a week ago, not thinking we’d even be here, I just can’t ask for more.

“Even after qualifying 18th I thought we were in for a long weekend, but our car pace again really saved us and brought us forward in the opener to then be well positioned for race two, and we’re strong enough to stay there, quick enough to hold on to the front placings, and that’s the most pleasing thing about the weekend. Our race pace is easily top 10, if not top five.

“Between now and Winton will be a lot more relaxed that between Townsville and Queensland – there’s some marks from this weekend, but we can certainly deal with that. We did everything perfectly before we got here, even in all the rush, so when we rolled out of truck, the car was the best it has been all year, it was really quick this weekend, so now I can look forward to Winton to keep pushing further.

“In my view, we have the best team on the grid. They’re all volunteers who work incredibly hard to get us here and keep us strong, and it wouldn’t happen without them. To those supporters who joined us on car this weekend, without that support we wouldn’t have been here for the weekend, it’s as simple as that, their support means everything, so we’re glad we got some decent results for them.”

Aaren said the weekend started shaky – qualifying back in the pack made it difficult as at track where it is.

“Through the weekend, we just stayed focused and worked our way up to where we should’ve been, so we need to work on qualifying better because our race pace has always been there,” he said.

“We’re probably a bit behind the eight ball to be honest, and we went down a path we shouldn’t have then felt a little like we’d lost our head, but as we do, the team regathered, got the car to where I was happy and times were good, and each race we achieved a bit more again. If there hadn’t been so much drama on track, I know we could’ve made a bigger improvement.

“If you’d asked me at the start of the weekend where we’d be, seventh for the round, I would’ve told you that you were dreaming, but it shows what consistency can achieve and how fast our cars are in the races.

“Our crew makes it all worth it. When you see your brother do well, and his drive was awesome to place well for race two and take a team best second, the feeling you get when you know you’ve put everything you have in to see him do well, it's inspiring.

“We’ll go away having learnt more, gaining more confidence from what we’ve been able to achieve and we’ll fix the bent doors which seems to be a regular thing for us this year, but so do top 10 results so we’ll take that. I feel like I could open a donut shop with all the black donut rings on my car from the weekend! Without the pressure of a big fix, we’ll focus on setups, and think about what we want the cars to do at Winton – there’s still more in Novocastrian Motorsport.”

The next Dunlop Series round is part of the V8 Supercars Winton 360 at Winton Motor Raceway in Victoria from August 23-25. Tickets are available now.

More of the Same for Douglas in Ipswich