The fight came down to a one-lap dash, until Jones had a mid-corner moment at The Chase and was tagged by Jacobson.

Both drivers fired off, allowing Fiore to sweep through to take the win while Jacobson limped home in fourth and Jones got stuck in the gravel.

The MW Motorsport driver, whose Nissan team-mate Alex Rullo inherited second, explained he had envisioned the incident before the restart.

"Honestly, it sounds stupid, but I had that exact scenario play out in my head under Safety Car," said Fiore.

"I thought 'something is going to happen at The Chase, because there is stuff all over the track'.

"All I saw was Garry's right-front lock, I didn't know what happened to Macauley.

"I saw Garry lock his right-front and I thought he might actually make the corner, but he didn't, he ran wide and I was able to come through and take the win.

"I was still pumped when I was getting out of the car; it was unreal, such a good feeling. To cross the line first, it was a little bit surreal.

"To see that chequered after being in the lead for only one corner, I was rapt."

Fiore was earlier involved in a clash with Paul Dumbrell at The Cutting, which ended the points leader's race.

Once reviewed, the stewards took no further action, leaving Fiore with his second victory of the campaign. 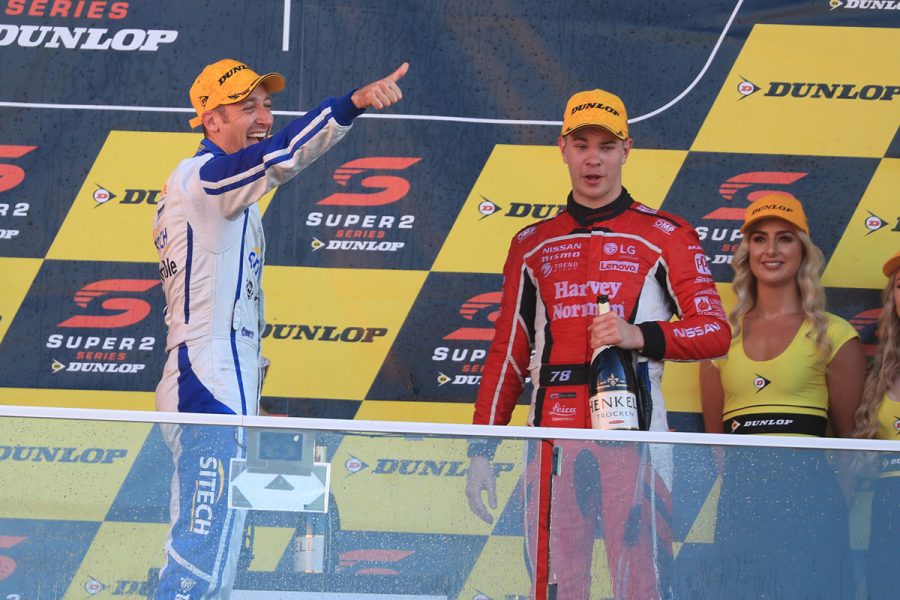 He said the win was "right up there" with his Supercars main game podium alongside Michael Caruso on the Gold Coast, and hometown Super2 win earlier this year.

"Bathurst is it," he said. "Awesome to finish up on top here.

"The Nissan Motorsport team, I've been with them now for five years and to see all them go crazy – Caruso told me they were all going crazy in the garage and obviously for Alex as well – it was awesome, just such a good feeling."

Rullo, also a Nissan PIRTEK Enduro Cup co-driver, said he wasn't surprised by the late drama, but admitted he nearly got caught up in it himself.

"I guess the same sort of scenario played out in my head also," he said.

"I thought we were going to get the [chequered] flag under the Safety Car, but obviously they let us run green, credit to the stewards for that.

"Obviously the smoke went up there and I was actually too busy watching that, I also went off myself. I kept it on the track and went on to take P2."

Chris Pither passed Jacobson on the run to the flag to take third, and displaced Dumbrell at the top of the standings, by 32 points.

Jacobson moves into third, ahead of Rullo, Brodie Kostecki and Fiore in sixth, with the final round on November 23-25, as part of the Coates Hire Newcastle 500.