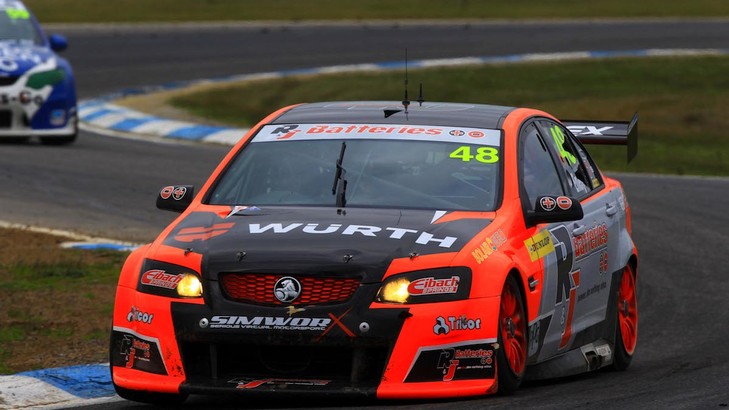 Returning to the scene of his maiden Dunlop Series race win, Geoff Emery is confident he can record another solid result at this weekend's Winton 400.

The Melbournian told v8supercars.com.au he heads to his test track with a better understanding of his Holden Commodore and a wealth of confidence.

“I’ve always had a good run at Winton and I think this year’s my best chance yet,” Emery said.

“We showed our car has good race pace at Adelaide in coming from last to 11th in the second race and I’m hoping to bring that speed to Winton. We have a strong car so I think we can be close to the pointy end next weekend.

“It took me about a year to learn the car but I’ve learnt so much in the last 12 months and with that comes confidence.”

In 2013, a ninth place finish in the opening race put Emery on the front row for the second race and after capturing the lead in the opening laps, he held on to claim the win.

According to Emery, qualifying is even more crucial at Winton because of the tight nature of the circuit.

“You need to get that one lap down in order to be competitive because the top 10 guys in the series have a lot of experience so it makes for a really tough weekend if you don’t do well in qualifying.”

Winton is also where Emery’s best career qualifying position of fourth was set, in 2013.

Emery is a firm believer of the category and is pleased with the new longer races and multiple qualifying sessions that will take place throughout the year.

“We should be as close to the main series as we can be,” he said.

“The changes made this year are really good I think. I’m not aspiring to be in V8 Supercars so the longer races are better and make the category more like the main series.

“Having 40 minute races really teaches you to look after your tyres,” Emery added.

The Dunlop Series kicks off today's V8 action, with practice beginning at 10.35am local time. A second session follows at 12.30pm.

Pither: Victorian teams the ones to beat

Russell puts Points on the Board in Adelaide

Dumbrell Wins First Round Back Thanks to Late Pass

28/02/2014
Related Content
Kean enlists D'Alberto's assistance  ›
03/04/2014
Russell's new look for 'second home round'  ›
02/04/2014
Pither: Victorian teams the ones to beat  ›
02/04/2014
Waters wants qualifying consistency  ›
31/03/2014
Geoff Emery  ›
Stay In The Know
Sign up to the Virgin Australia Supercars Championship Newsletter
We use cookies to ensure that we give you the best experience on our website. If you continue to use this site we will assume that you are happy with it.Ok