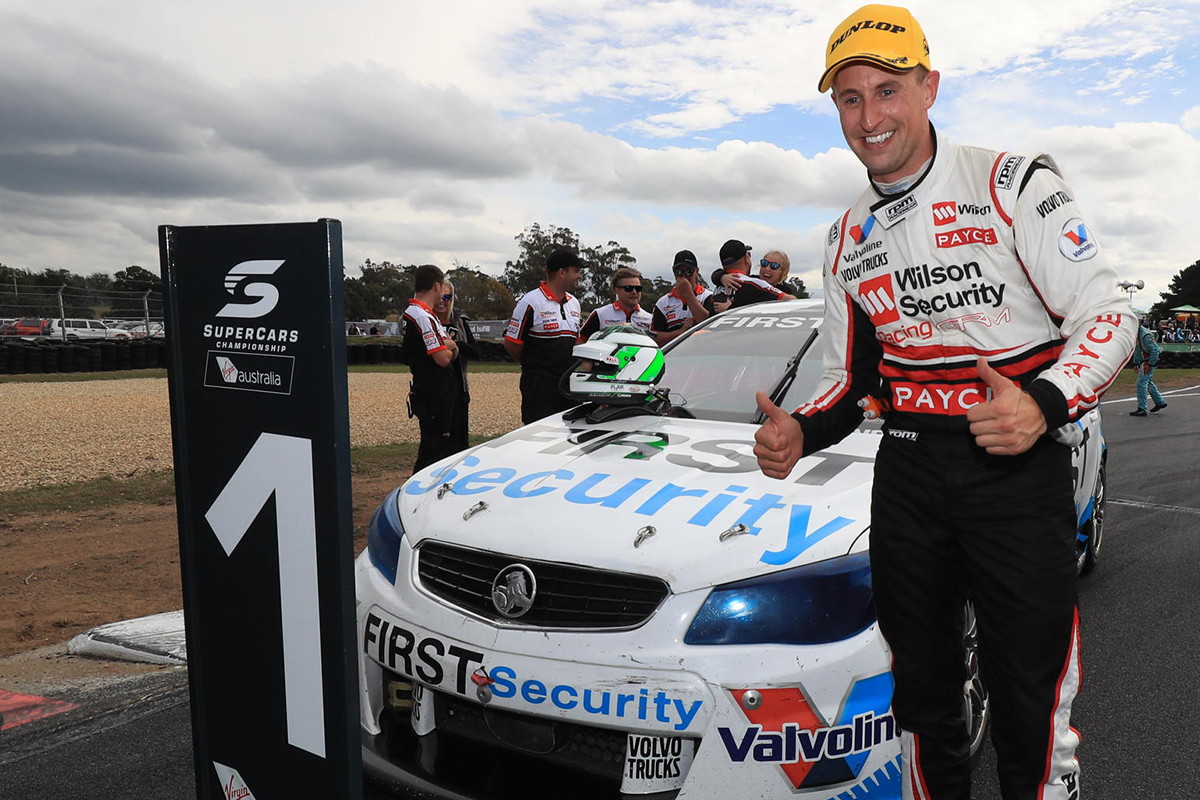 Paul Dumbrell held off Chris Pither to take out the third and final race for Round 2 of the 2018 Dunlop Super2 Series at the Typerpower Tasmania SuperSprint.

Dumbrell seized his opportunity to sneak past into Turn 1 after Pither was slow off the line, a move that was replicated in the opening race of the weekend.

The Garry Rogers Motorsport driver applied pressure throughout as the pair battled back-and-fourth, but was not able to find a way through.

Dumbrell finished just 0.4223 seconds clear of Pither, who took out the second round in his VF Commodore, ahead of Dumbrell and Brodie Kostecki.

Macauley Jones finished third with his best result of the weekend, ahead of Kurt Kostecki who greeted the chequred flag behind his team-mate Brodie Kostecki.

Brodie Kostecki finished the race in fourth, but copped a five second time penalty which sent him down to sixth, gifting Kurt Kostecki fourth place and Alex Rullo fifth.

Will Brown finished the race where he started in seventh, followed by Thomas Randle, who was the best of the rookies in eighth.

Shae Davies and Adam Marjoram occupied the next two places, after Marjoram copped a significant hit from Mason Barbera as the pair entered Turn 4.

Barbera retired from the race as a result of the contact, pulling his GRM Holden onto the infield.

Tyler Greenbury speared into the rear of Brenton Grove during the formation lap, resulting in an extra formation lap and a reduced 29 lap finale.

The drama continued on the opening lap when Kurt Kostecki and Jack Smith made side-to-side contact at Turn 2, forcing the latter wide.

Further contact between Smith and Garry Jacobson spun the Holden and did enough damage to put the Nissan out of the race.

Matt Chahda and Nathan Morcom also made contact further back in the pack, shooting the right-front of the former's Holden into the air.

Later on, Dominic Storey locked-up and went off track at Turn 4, beaching his VF Commodore in the gravel and resulting in a Safety Car.

The full course yellow and subsequent restart did little to the running order, with the race relatively settled in its closing stages.

The third round of the series will take place at the Perth SuperSprint on May 4-6.

05/04/2018
Stay In The Know
Sign up to the Repco Supercars Championship Newsletter
We use cookies to ensure that we give you the best experience on our website. If you continue to use this site we will assume that you are happy with it.Ok