Paul Dumbrell has started his 2018 Dunlop Super2 Series in style, with victory in the final race securing the round win at the Adelaide 500.

Having won Friday’s opener and taken second on Saturday, the Eggleston Motorsport driver seized his opportunity to sneak into the lead entering Turn 1 after polesitter Garry Jacobson was slow off the line.

With the victory, the Holden driver secured the round win, ahead of Jacobson and Kurt Kostecki. 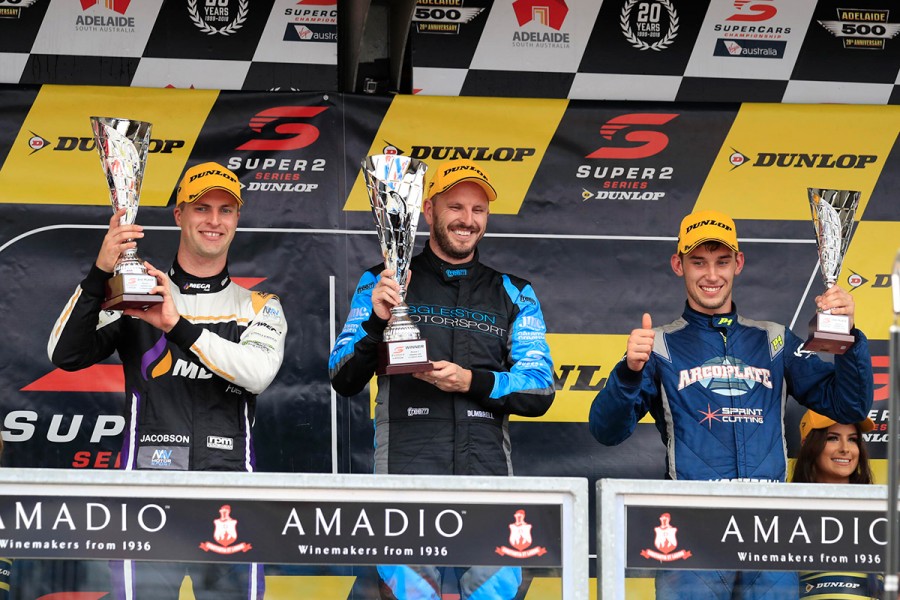 Jacobson moved back into second into Turn 9 on the opening lap past Davies, despite clipping the wall on his way through Turn 8, but ultimately couldn’t pressure Dumbrell enough to get past.

Davies dropped down the field and found himself battling Dean Fiore for sixth, when he was tagged by Fiore at Turn 9 and spun around on lap 11.

As Davies got going again, he slid into the side of Brad Jones Racing rookie Zane Goodard’s Commodore, the left-rear damage causing Davies to retire.

Will Brown started sixth but made ground to pass both Davies and then Kurt Kostecki on his way to third for his second Super2 podium.

All three Kosteckis finished inside the top 10, with Kurt fourth, Brodie fifth and Jake ninth to equal his best Super2 results.

On the round points, Kurt Kostecki took third ahead of Brown and Macauley Jones, who was sixth in Race 3.

Storey was best of the rookies, ahead of Tyler Greenbury in 13th.

MW Motorsport pair Alex Rullo and Fiore finished 11th and 12th, Fiore demoted from sixth with a 15-second penalty for his clash with Davies.

For his part, Rullo also had five seconds added to his time for contact with Greenbury, while Matt Stone Racing recruit Bryce Fullwood’s tough weekend finished with 19th, after serving a drive-through for excessive kerb hops at Turn 1.

The second round of the series will be held at the Tyrepower Tasmania SuperSprint on April 6-8.