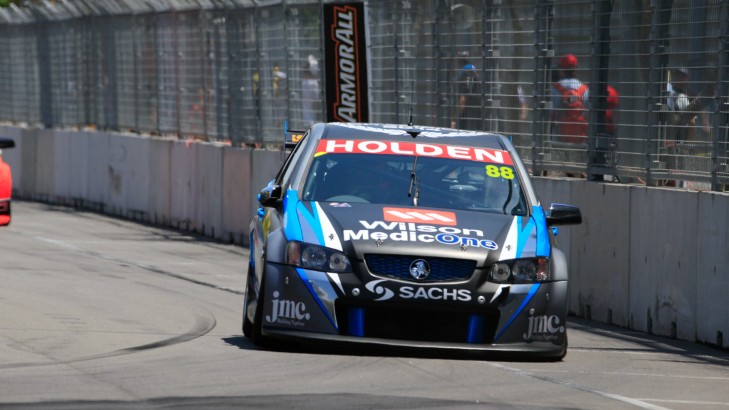 Paul Dumbrell has continued yesterday's quick form to claim ARMOR ALL Pole Position in the closing stages of today's qualifying session at the Sydney NRMA 500.

The accomplished racer strategically opted to not lay down some rubber until the final few minutes of the session, completing only four timed laps to snatch the top spot from Cam Waters by 0.4160secs.

"We knew the car was strong, and with the rules, we only had two sets of tyres and two qualifying sessions [over the weekend]," he told v8supercars.com.au.

"So, we decided we'll use one set today and one set tomorrow.

"The track generally gets quicker as the session goes on so we tried to leave it 'till quite late, but we nearly caught ourselves out - when we went out on our first timed lap, the red flag came out so it's a risky strategy, but you end up paying dividends."

The first and only red flag of the session was deployed after rookie Todd Hazelwood collected the tyre bundles at the chicane, ripping the front splitter off and leaving debris over the circuit. Due to penalty from causing the red flag, Hazelwood was stripped of his fastest time, relegating him to last place.

Waters will start the upcoming 23-lapper alongside Dumbrell, ahead of Ash Walsh, Andre Heimgartner and Chris Pither.

Aaren Russell, Andrew Jones, Ant Pedersen and Macauley Jones followed, while Geoff Emery managed to clinch the tenth spot after contact with the tyre bundle at turn one later in the session.

Taz Douglas makes his return to the series in 11th, while rookies Shae Davies and James Golding will start race one from 16th and 20th respectively.

Stay tuned for the Dunlop Series first race at the Sydney NRMA 500 coming up at 3.50pm ADST.